Richard Mofe Damijo To Be Given Chieftaincy Title 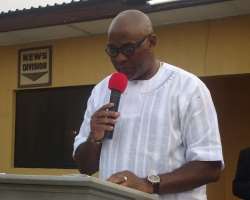 Veteran Nollywood actor, Richard Mofe-Damijo who was rumored to be ill sometime ago because of his weight loss is set to be honored with a chieftaincy title.

The actor who is also the Delta State Commissioner for Arts and Culture will be given the title of 'Dike Oha na Nollywood' during the coming 4th edition of the three-day Nollywood Igbo Film Festival.

The 4th edition of the film festival will take place in Asaba, Delta from August 27th to August 30th where the actor will be given the chieftaincy title.

According to reports the founder of the festival Nze Harris Chuma said RMD is being honored for his contributions to Nollywood. No doubt that the actor has contributed immensely to the growth of the industry in one way or the other. Congratulations to him.