This is no joke:see what comedienne PRINCESS did!. 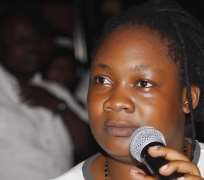 Olofofos who read tales from the gulder ultimate search camp that crooner Daddy Showkey reportedly beat up princess the comedian are giving reasons why daddy showkey has done a good thing.

This tale you are about to read is not a script from nollywood,it happened live and direct but in the uk.

Here is what was whispered

''Dewaves(Dayo) and his wife lived peacefully together in the uk and in 2009 princess went to the uk to attened the premiere of a movie she featured in.

Dewaves wife always let princess stay in the house whenever princess was in london albeit it that prnicess always behaved like landlady whenever she was in the house and acted like the ladys mother as she was far older than her.

On the day of the event that princess was in london for,the hubby and his wife had an arguement and the wife held unto his shirt crying,the next thing princess who was in the house when this was going on,immediately called the police to report that the man was about to kill his wife,.the guy ran away immediately fearing for what the uk police will do to him.

He is in nigeria today and cannot return to the uk.He left behind his then pregnant wife who has since put to bed his child.

Princess also recently saw the guy in nigeria and went with area boys to harrass him telling him that this was her territory and not his.

Dewaves was so angry and he shed tears cursing prnicess for breaking up his home and still harassing him''.

if this recount is exactly what happened then i wonder ''wetin concern agbero with excessive load''.why didnt princess settle the warring couple the way africans settele quarells?

We hope princess gives her side of the story soon.we need to know why she made that CALL!!!!