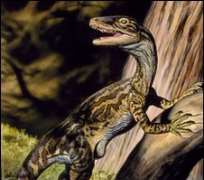 Immense volcanic activity helped the dinosaurs rise to prominence some 200 million years ago, a study suggests.

Dinosaurs were the dominant vertebrates on land for some 135 million years.

While it is widely accepted that an asteroid or comet wiped them out, there has been less agreement on the factors which led to their ascendancy.

The scientific paper, by researchers from the US and Taiwan, looked at several lines of evidence such as plant lipids and wood from sediments interbedded with lava flows.

These flows are dated to the end-Triassic extinction, which wiped out 50% of tetrapods (four-limbed animals) on land, 50% of terrestrial plants and 20% of marine families.

The scientists examined how two different isotopes (or forms) of carbon fluctuated during these volcanic eruptions. They found that the “heavy” form of carbon was depleted relative to the “light” form.

Super greenhouse
They say this reflects disturbances in the carbon cycle at this time, including a spike in atmospheric carbon dioxide (CO2) and aerosols (fine solid particles).

This would have resulted in “super” greenhouse warming, according to lead author Jessica Whiteside, a geologist at Brown University in Providence, Rhode Island.

“We are showing that these events are synchronous with the extinction and that the events all occur within a few tens of thousands of years of the eruption of these huge lava flows,” Dr Whiteside told BBC News.

At Red Head in Nova Scotia, Canada, the flood basalts (brown) can be seen resting on the end-Triassic layer (white)

The scientists have not yet determined the killing mechanism.

Neither can they say for sure why the dinosaurs survived, although Dr Whiteside suggests it could have been “blind luck”.

Nevertheless, they propose that the climatic catastrophe caused by the mass eruptions led to the extinction of the dinosaurs' main competitors, the crurotarsans.

These ancient crocodile-like creatures had competed vigorously with early dinosaurs during the Triassic Period.

The study is not the first to posit a link between volcanic activity and the end-Triassic mass extinction.

But the relationship between volcanism, carbon isotope anomalies and extinctions had never been tested in rocks preserving records of all three phenomena. The scientists say this is the first study to do so.

This was formed during the break up of the “supercontinent” known as Pangaea, causing lava to pour out on to the Earth's surface for some 700,000 years.

“This is actually the largest flood basalt province known in the Solar System. It covers something like 9-11 million sq kilometres. To give you an indication of how large that is, it's about one-third the size of the Moon,” said Dr Whiteside.

“We're talking about a serious amount of the Earth being covered in lava.”

It dwarfs the Deccan traps, a large igneous province in west-central India. The volcanism which created the traps had been implicated by some in the extinction of the dinosaurs 65 million years ago.

Earlier this month, a panel of experts strongly endorsed evidence that a space impact was instead responsible for this extinction.

Writing in Science journal, they ascribed the cause to a 10-15km space rock striking the Yucatan Peninsula. This caused a global winter that played havoc with marine and land ecosystems.