Brazil showing some nerves ahead of Chile match 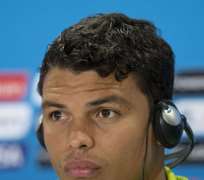 There's no denying it, the thought of sudden World Cup elimination is on the minds of Luiz Felipe Scolari and his Brazil squad.

The veteran coach wants to assure the people of the host nation, though, that nerves are nothing to be worried about.

”It's normal to feel uncomfortable and anxious ahead of this first elimination game,” Scolari said Friday, on the eve of Brazil's second-round match against Chile . ”We are a bit more scared and nervous.

”It's normal in any competition, not only because this one is in Brazil. We know we can't make mistakes, we can't lose.”

A win over Chile at the Mineirao Stadium will keep Brazil on track for its sixth World Cup title, while a loss would be considered a massive failure in a country which has invested billions to stage the tournament.

Scolari said there's a chance that Chile plays better than Brazil and eliminates the hosts, which shouldn't be considered the end of the world if it happens.

”We have been doing our job with a lot of dedication, but we have to understand that if they are better than we are in the game and they win, we can't lower our heads, end our lives and throw ourselves into a well,” he said.

Brazil has reached the quarterfinals of the World Cup every time since 1994. Its last elimination in the second round was against Argentina in 1990.

The Brazilians haven't lost to Chile since a World Cup qualifier in 2000, and have never lost a head-to-head with the Chileans on home soil. Since 2000, Brazil has won 10 of 12 matches against the Chileans. The teams have met three times in World Cups, with Brazil winning 4-2 in the semifinals of the 1962 tournament in Chile, then 4-1 in the second round in 1998 and 3-0 at the same stage in 2010.

”Statistics don't mean anything to us,” Brazil captain Thiago Silva said. ”We have to remember that in the other side there is a team with the same dreams that we do. So if we can't advance, life must go on.”

Scolari hinted that he will change the team's midfield for the match, replacing defensive midfielder Paulinho with Fernandinho , who played well as a second-half substitute in the 4-1 win against Cameroon . The Manchester City player, a late addition to the World Cup squad, scored a goal and helped set up another.

It remained unclear if defender David Luiz would be fit to play after leaving Thursday's practice because of a back problem. The Brazilian federation said he participated in part of the team's training session on Friday, but would remain undergoing treatment.

Brazil has four players going into Saturday's match with a yellow card, including Silva, striker Neymar and defensive midfielder Luiz Gustavo . Another yellow against Chile will sideline them from the quarterfinals if Brazil advances.