The Great Human Delusion: All Parents Love Their Children 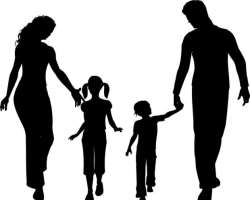 Despite overwhelming evidence to the contrary, there is a widespread belief that all parents love their children. This is not so. Many parents are so badly emotionally damaged as a result of their own childhood experience that they are not capable of loving their children. Moreover, the fear, self-hatred and powerlessness that characterise most humans means that parental violence against children is chronic even if one or both parents are capable of love.

Evolution's great trick was to connect reproduction with intense but transitory sexual pleasure, not love. Couples may engage in sex as a result of love for each other and possibly the desire to create and care for a child. But many children are conceived outside the loving long-term

relationship necessary to nurture a child and even those children who are conceived within this framework will routinely suffer parental violence.

And without genuine communities, as occurs in tribal situations, modern nuclear families leave children isolated from the readily available emotional support options that a more close knit community would offer.

districts. In extreme cases, such as those in which children are forced into sexual slavery, bonded labour or military service, parents are often responsible for selling the child to improve their own material circumstances. (See David Batstone, 'Not for Sale: The Return of the

Unfortunately, these extreme cases should not be used to obscure the foundations on which they are based: the behaviour of many ordinary parents who, because of the damage they themselves suffered during their own childhood, might have children for reasons other than love - for example, a prospective mother might simply be trying to avoid or defer undesirable employment; a prospective father might be trying to create an acolyte who feeds the gaping hole in his own sense of self-worth - and even if this is not the case, all parents still inflict what I have called 'invisible' and 'utterly invisible' violence on each of their children throughout their childhood. See 'Why Violence?'

http://tinyurl.com/whyviolence and 'Fearless Psychology and Fearful

One driving social force in this horror equation is the imperative to obey conventions, commands, rules and the law, and few parents have sufficient sense of Self to resist this imperative in defence of their child. This is why virtually all Western children (and many others), for example, are imprisoned and enslaved in school with active parental cooperation. The True Self of any individual cannot be nurtured under a relentless regime of submission to the will of others whether parent, teacher or other controlling adult.

The Problem of Obedience
One central problem of terrorising individuals into obedience of conventions, commands, rules and the law is that once the individual has been so terrorised, it is virtually impossible for them to change their behaviour because they are now terrified of doing so. If the obedient behaviours were functional in the circumstances then, apart from the obviously enormous damage suffered by the individual, there would be no other adverse social or environmental consequences.

Unfortunately, when all humans have been terrorised into behaving dysfunctionally on a routine basis (in the Western context, for example, by engaging in over-consumption) then changing their behaviour, even in the direction of functionality, is now unconsciously associated with the fear of violence (in the form of punishment) and so desirable behavioural change (in the direction of reduced consumption, for example) is much more difficult.

To reiterate: if all individuals are terrorised into obedience of conventions, commands, rules and laws, then even when a convention, command, rule or law is utterly dysfunctional, few individuals will have the capacity to identify, let alone resist, the dysfunctionality precisely because the fear of being subjected to violence (punishment) obliterates both of these capacities.

The fear associated with behavioural change is a key reason why it will be difficult to eliminate human violence and to prevent human extinction. We are, to a large extent, terrifiedly locked into the behaviours that both drive violence and the rush to extinction.

In the words of Anita McKone: 'Violence against legitimised victims is invisible.' And who are 'legitimised victims'? Depending on the cultural context, it is the peoples of Africa, Asia and Central/South America, indigenous peoples, women, workers, non-white peoples, military personnel, 'criminals', 'enemies', non-human species and natural systems of the Earth

itself. But, in all cultural contexts, all over the world and all throughout human history, legitimised victims always and pre-eminently includes children (and that means you).

According to Anita: 'Violence against legitimised victims is always presented by the perpetrator as necessary, reasonable and caused by the victim. The victim may be portrayed as causing the violence against it in one of three ways:

Can a Child be Naughty?
No child is ever 'naughty'. Indeed, it is not possible for a child to be 'naughty'. 'Naughty' is a delusionary concept. The child at birth is genetically programmed to seek to meet their own needs and they will go about doing this with intelligence and increasing Self-awareness if allowed to do so. The child is also genetically programmed to expect parental and other adult assistance (primarily by providing a loving and safe environment) with which to do this.

And they are genetically programmed to have feelings of fear, pain, anger, sadness and others so that they can recover from incidents in which their efforts fail, or in which the violent or unintentional interference of others make it fail, and to determinedly keep trying until they succeed. This is how a child learns to walk, for example.

Many adults equate 'naughty' with 'disobedient', without questioning the functionality of obedience. A child is genetically programmed to seek to meet their own needs, not obey the will of another. And in some cases, forcing the child to be obedient will simply generate an equally dysfunctional compulsion to disobey (thus making the prospects of mutually beneficial cooperation even bleaker).

However, there is a deeper dimension to the problem of 'naughtiness' than this. Because virtually all adults have been so dysfunctionalised by violence, most now believe that chronic and compulsive interference in the natural development of the child, and particularly in the expression of their feelings, is 'normal'. Why? Because this violent interference is regarded as necessary to 'socialise' the child in the ways of its society.

But the outcome is disastrous and tragic: this violent interference makes it impossible for any child to become properly functional (which does not include being obedient) let alone to realise their genetic potential for consciousness (or Self-realisation).

Our world is in trouble. We fight wars, impose exploitative economic relationships on many people and destroy our environment, among many other manifestations of violence. Fundamentally, these problems are all outcomes of our greatest delusion: that we humans love our children. If we are to effectively tackle all of our other problems, then we must include in our

strategy learning how to love our children genuinely. Or all of our other efforts will ultimately be in vain.

If you wish to publicly declare yourself to be a part of this effort, you are welcome to join the worldwide movement to end all violence by signing the online pledge of 'The People's Charter to Create a Nonviolent World' http://thepeoplesnonviolencecharter.wordpress.com

If you love your child, then listen to their feelings and let them do what these feelings tell them. That is what evolution intended. It had a few billion years to work it out.