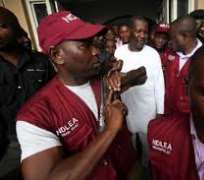 Ogun State government in western Nigeria today disclosed that it has in the last two years shut down 63 illegal pharmaceutical shops across the state.

The government reiterated its commitment towards sustaining the clampdown on illegal pharmaceutical stores which can aid fake drugs and its abuse.

The disclosure was made today by the State Commissioner for Health, Dr. Olaokun Soyinka in Abeokuta, the state capital at a World Press Conference, marking the 2014 United Nations International Day Against Drug Abuse and Illicit Trafficking.

The theme for this year's event is: “A message of hope; drug abuse disorders are preventable and treatable”.

Soyinka stated that some of the proprietors of the affected illegal pharmaceutical stores have also been prosecuted in accordance with stipulated laws.

He explained that various arrests and prosecutions were made by Ogun State Drug Abuse Control Committee (OSDACC) in collaboration with officials of the National Drug Law Enforcement Agency (NDLEA) and other security agencies.

While attributing causes of the deaths and violent crimes to the activities of persons under the influence of hard drugs, Soyinka charged parents, guardians and others who care for the youths to be actively alerted and watch out for signs of drug abuse on their children, particularly change in their behaviour.

He said drug abuse and trafficking in narcotic and psychotropic substances is a global phenomenon, which is capable of destroying social cohesion, undermining economic and political stability of nations.

According to him, “that is why we are telling the parents that they should not expect these problems to just show themselves to them. They must be proactive and be alert to them. Everybody is at risk, every social stratum, no matter how poor or how wealthy you are, they should not think you cannot be affected.”

While commenting on the increasing rate at which people consume other illicit drugs, such as cannabis sativa, Soyinka said the State, in collaboration with the appropriate law enforcement agencies, would be considering the option of establishing a taskforce which will go after those incharge of distribution, sale and consumption of the weed to further tame the increasing rate of drug abuse in the society.

On public smoking, the Commissioner, who lamented the challenges confronting the state in achieving the desired result, assured that the state would do the needful to achieve effective enforcement through domesticating what he called the federal law on smoking.