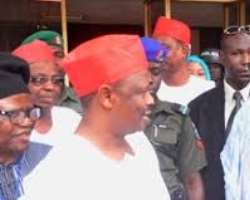 Former Head of State, Gen. Muhammadu Buhari (retd.), and the Governor of Kano State, Alhaji Rabiu Kwankwaso, may be going for ech other's jugular over their attempt at picking the presidential ticket of the All Progressives Congress.

A report by Sunday PUNCH indicate that supporters from the defunct Congress for Progressive Change, which was one of the three parties that merged to form the APC, were already preparing for a showdown with the APC governors who, it was leant, were planning to impose Kwankwaso as the candidate from the North-West in the contest for the opposition party's presidential primary.

A Buhari supporter, who requested anonymity, told some journalists in Abuja on Saturday, that any attempt to give the ticket to Kwankwaso would threaten the party's chances of winning the presidential election in 2015.

He said, “The CPC dissolved into the APC purposely to advance Buhari's presidential ambition. Any games by some of the governors or anybody to push aside Buhari or force him to transfer his enormous political goodwill to another ambitious candidate would not be acceptable.

“Buhari is the pillar on which the hope of the APC stands in 2015 with respect to the North-west and any political attempt to blackmail him on the basis of the so-called desire to transfer power to younger politicians would spell doom for the APC.

“Buhari's age is inconsequential, because a 71-year old aspirant with proven integrity is better than 10 younger politicians if they are rogues.”

He warned that the alleged moves to persuade Buhari to abandon his ambition “for the sake of the so-called younger politicians and larger party interest” would be resisted by Buhari loyalists from the former CPC.

This unease, among the Buhari supporters, according to another former CPC member, was capable of threatening the unity and cohesion in the APC.

The source said, “Let me tell you, nobody should make the mistake of blackmailing Buhari out of the race. There is no compromise.

“We, the Buhari supporters, are not ready to allow him transfer his political capital to any governor who is more interested in using his goodwill to advance his selfish ambition. Buhari's integrity has no equal and therefore, we have not discovered any governor in APC to match Buhari's uprightness.”

The development is one side of the permutations of what is likely going to be bloody fight for the ticket of the APC. Some pundits believe whatever equation that does not take Asiwaju Bola Tinubu, which has a tight gripp of the APC in the South West, may just be a pipe dream.

Dream it is believed still favours Buhari running as the head of a ticket featuring him as the vicwe.