Why we withdrew corruption charge against Abacha: FG 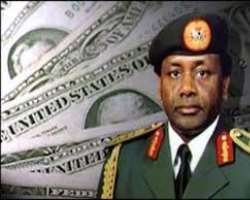 Why we withdrew corruption charge against Abacha: FG
Listen to article

. Govt gets $227m Abacha loot
The Federal Government has said it withdrew the N446.3 billion corruption case against the son of the late Head of State, Gen. Sani Abacha, to enable it recover more of the loot stashed abroad by the former military leader.

The Attorney-General Mohammed Adoke, through government lawyer Daniel Enwelum, told Justice Mamman Kolo of an Abuja High Court on Wednesday that he had filed a notice of discontinuance of the case.

According to him, the action is hinged on bargain that will enable government receive 167million euros ($227million) from the Principality of Liechtenstein, being part of the Abacha loot in that territory.

The government filed a nine-count suit against Mohammed who it accused of “dishonesty, receiving stolen property and voluntarly assisting in conceding money belonging to the state, estimated to N446.3 million.

Finance Minister Dr. Ngozi Okonjo-Iweala, in a statement by her spokesman Paul Nwabuikwu, said President Goodluck Jonathan would constitute an inter-ministerial committee to identify the best projects and programmes in which to invest the funds.

According to the statement, President Jonathan has directed that “part of the funds be saved in the Future Generations Fund, one of the Funds managed by the Nigerian Sovereign Investment Authority (NSIA) to help secure the economic future of both Nigerian youths and unborn Nigerians.”

The minister said as part of the agreement reached with the Principality of Liechtenstein, the World Bank would assist in monitoring the utilisation of the funds in specific projects.

“The return of the funds is the culmination of a robust 16-year effort by the Federal Government to retrieve the funds. Working under the leadership of President Jonathan, the Attorney General of the Federation, Mr Mohammed Adoke-led the effort with support from the Coordinating Minister of the Economy and Minister of Finance, Dr Ngozi Okonjo-Iweala and the National Security Adviser, Col. Sambo Dasuki,” Nwabuikwu said.

He added that the return of the fund “was delayed by the suit instituted at the European Court of Human Rights (ECHR) by companies owned by the Abachas alleging infringement of their rights to a fair trial and to peaceful enjoyment of their possessions. As a result, the Principality of Liechtenstein could not proceed with the return of the funds.”

However, to demonstrate the commitment of the Federal Government to retrieving the funds which belong to the Nigerian people, Nwabuikwu said “the Attorney-General of the Federation also filed a suit against Mr Mohammed Abacha before the Abuja High Court and as part of the negotiations to expedite the recovery of the funds, the Abachas agreed to discontinue their suit before the ECHR.”

The Federal Government he said, “also equally withdrew the case against the Abachas, to pave the way for the release of the looted funds by Liechtenstein.”

The statement added that the Federal Ministry of Finance had released N200 billion for capital projects for the second quarter of the year. This brings the total capital releases for the first two quarters of 2014 to N400 billion.