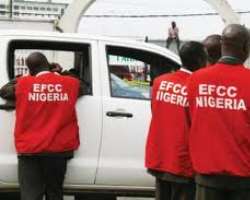 In just three months, the Economic and Financial Crimes Commission (EFCC) arraigned 121 suspects, including companies, for alleged fuel subsidy scam and oil theft in the Niger Delta, according to the EFCC's Head of Media and Publicity, Mr. Wilson Uwujaren.

Uwajaren said that the agency in addition recovered about N6.53 billion from evaders of customs duties at the Lagos ports.

He spoke to reporters in Abuja on Monday on the agency's activities between March and June.

The EFCC spokesman said some Internet fraudsters had been arrested, citing example of one Jesse Omokoh, who allegedly obtained $90,000 from a 67-year-old Australian, Jette Jacobs, in a romance scam.

According to him, the suspected scammer is on trial at an High Court in Ibadan, Oyo State.

Uwajaren said that the commission upped its war against theft in the oil sector, where 17 oil marketers, 23 oil marketing companies and 81 suspects have been arraigned for alleged oil theft.

“But if you add the individuals and their companies, we have over 40 cases on trial for obtaining subsidy from the Federal Government without supplying products. Those cases are ongoing; they are progressing in court at different stages. Apart from the one we have in court, there are also a number of investigations that are going on.

“Investigation of subsidy is not a straight-forward thing; it is a very complicated procedure. It is not something you can just conclude within a country; you have to deal with organisations with proper jurisdiction, and these things take time.

“That is reason some people think we don't have enough people standing trial in court. It is a complicated procedure, and that process is still on.

“In terms of whether or not we have recovered money from the subsidy thing, I say yes. I recall that about two months ago, the Executive Chairman of the EFCC announced that the commission had recovered N4.3 billion from the subsidy scam. That is very significant, considering the complicated nature of those transactions. We are not relenting in our determination to get to the root of the matter.”

On how the EFCC collaborated with other security agencies to fight oil thieves in the Niger Delta, Uwujaren said: “Oil theft is a subject that is of concern to every Nigerian. For us as a commission with a mandate to check oil theft by arresting and prosecuting offenders, I'll like to report that commendable strides have been recorded in checking this menace.

“Of course, what we have done in this area could not have been possible without the assistance of sister-law enforcement organisations, notably the Navy and the Army.

“For some of you, who want hard statistics on the records of the commission in fighting oil theft in the Niger Delta, it is my pleasure to report that the commission, from January 2013 till date, investigated 21 cases of crude oil theft. Eleven tanker vessels and 16 tanker trucks were recovered, while 81 suspects have been charged to court.

“A few weeks ago, two Indians – Sailesh Kumar Singh and Chadrashekar Sharma – were jailed after successful prosecution by the commission for oil theft.

“The two were among the 12 suspected oil thieves arrested in Brass, Bayelsa State, in 2012 by the Joint Task Force (JTF) with 157,882 litres of suspected stolen crude oil. They are to serve 15 years imprisonment.

“This should serve as a deterrent for others still engaged in the nefarious trade.”

On evaders of import duties, Uwujaren said a large-scale investigation on the scandal at the ports led to the recovery of N6.53 billion unpaid Customs importation duties in Lagos.

The EFCC spokesman said the battle had shifted to Onne Port in Rivers State against duty evaders.

He said: “The desire to encourage local collaboration and erase unnecessary rivalries in law enforcement is the bedrock of our cooperation with the Nigerian Customs Service (NCS).

“Another joint recovery has began operations at Onne in Port Harcourt in April 2014 to recover Customs' revenue in the Southsouth. We will be briefing you in the future on the outcome of this exercise.”

Uwujaren said the EFCC had been unrelenting to stamp out Internet crime.

He added: “Several cases were brought to trial in the last couple of weeks. First is the arraignment and conviction in Kano of Daniel Okpara, who defrauded people through a facebook account he opened in the name of the Executive Chairman of EFCC, Mr. Ibrahim Lamorde.

“Okpara lured his victims by promising them jobs with the commission. As we speak, he is in prison, serving a three-year jail term.

“Early this month, the commission arraigned at an Ibadan High Court, a suspected Internet fraudster, Jesse Omokoh, who allegedly obtained $90,000 from a 67-year old Australian, Jette Jacobs, in a romance scam.

“Omokoh, 28, allegedly met the lady in an online dating site and struck a relationship with a promise to marry the woman. The lady relocated from Australia to South Africa in November and the accused left Nigeria to meet her in Johannesburg on February 4, 2013. Unfortunately, five days later, she was found dead in her apartment.”

The EFCC spokesman said the accused fled South Africa but was arrested by the EFCC because of the collaboration it has with the Australian police.

“Such engagements enable us to assist the host agencies in pending trans-national investigations, while exposing our staff to international best practices,” he said.

According to him, the commission has also hosted investigators and prosecutors from Zambia, the United States (U.S), the United Kingdom (UK), the Netherlands, Niger, World Bank and Africa Development Bank (ADB) and signed international memoranda of understanding (MoU) or joint working agreements.

Other international partners, such as the British Serious Fraud Office, the Economic Crimes Network (New Zealand) the Global Fund, the United States Trade Commission, the World Bank and a host of others had also been sealed.