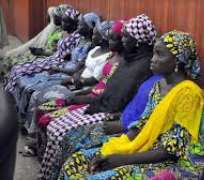 Suspected Boko Haram militants kidnapped at least 20 young women over the weekend in the town of Garkin Fulani, in the northeastern Nigeria.

The town where this latest incident occurred is just 8 kilometres from Chibok where more than 200 schoolgirls were taken on April 14, local officials said Monday.

The incident in the village of Garkin Fulani is the latest in a series of abductions for ransom in the area, according to an official with the Miyetti Allah Cattle Breeders Association of Nigeria, the umbrella union of all nomadic Fulani in the country.

CNN quotes the MACBAN official, who is in Garkin Fulani, as saying that the number of women kidnapped was as many as 40.

The suspected militants came into the village in broad daylight on Saturday, heavily armed and wearing military uniforms.

'(They) took away 40 women, all of them young mothers,' said the official, who asked not to be named for safety reasons.

A Borno state official confirmed the abduction but said only 20 women were abducted.

'We are working to establish the circumstances surrounding the abduction,' the government official said on condition of anonymity because he is not authorized to speak about the incident.

Alhaji Tar, a member of the Vigilante Group of Nigeria, a loosely formed civilian force tasked with providing security, also put the number at 20, along with three young men who were left to look after the village while the other men took their cattle to graze in the bush.

The location of the women is still unknown and the kidnappers have not made contact with their families, Tar said.

'This is not the first time women are being kidnapped in this area. It has happened several times,' said the MACBAN official. 'They come and herd young women into their vehicles and will only release them when 30 to 40 herds of cattle are paid as ransom.'

The fear of deadly reprisals prevents the nomads from seeking military assistance, he said.

The terror group Boko Haram abducted an estimated 276 girls on April 14 from a boarding school in Chibok. Dozens escaped, but more than 200 girls are still missing . The kidnapping drew widespread international condemnation.

Nigerians and others have accused the government of not acting swiftly or efficiently enough to protect the girls seized in the dead of night.

Mike Omeri, the coordinator of the National Information Centre in charge of counterterrorism, was unaware of the latest reported kidnapping.

'We have not received any information on the kidnap of any Fulani women,' Omeri said.

Omeri did, however, note a Nigerian military operation over the weekend that killed 50 suspected Boko Haram militants in Bita village, near Garkin Fulani.

The Ministry of Defence also confirmed the operation.

Boko Haram translates as 'Western education is a sin' in the Hausa language. The militant group says its aim is to impose a stricter enforcement of Sharia law across Nigeria, Africa's most populous nation, which is split between a majority Muslim north and a mostly Christian south.

If the death toll is confirmed, it will be the worst attack by Boko Haram in its five-year insurgency that has killed thousands, mostly in the northeast.

The Rainbow, with agency report