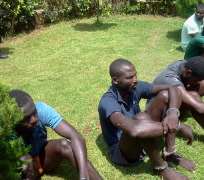 Edo State Governor, Adams Oshiomhole, on Wednesday ordered the demolition of a block of four flats identified as a hideout of kidnappers in the state, which he would supervise by himself.

The Governor, who gave the directive when four suspected kidnappers were paraded before him by officers of the State Security service, SSS, in Benin, said that the den of kidnappers located along Sapele Road in Benin City would be destroyed according to the dictates of the law.

'I am obliged to obey the directive of the law, which is that any property used for kidnapping has to be brought down.

'So, with the narrative from them (suspected kidnappers), the property will be demolished under my supervision and we are doing it this week,' he said.

Oshiomhole decried the dastardly acts of some youths in the state who engage in heinous crimes, even when they are legally and gainfully employed, in the name of making quick wealth overnight and urged residents in the state to be mindful of the occupations and activities of their neighbours so that vital information can be fed to security agencies in the state to make the state safer for all.

He commended the security agencies for rescuing the victims and apprehending the suspected culprits, while affirming government's support for the effective operations of the agencies in the interest of the people.

Speaking earlier, the Director of the State Security Service, Bello Tukur Bakore, who paraded the suspects: Sunday Ekparamen, Joshua Igbim, Ikpendor Ibrahim and Christian David, said one of them, Sunday, also known as Blacky, had participated in the kidnap of the children and Chairman of a private hotel whose driver was shot in the eye, a doctor from the University of Benin Teaching Hospital and a pastor.

While narrating how his group kidnapped the children, Sunday, a 27-year-old father of one and a mechanic, said the driver of children of the private hotel owner was shot in the eye, after double crossing the car.

'We operated with two vehicles, Siena and a Camry, one of which had a gun used by Ejiro, one of the leaders of the gang. He shot the driver of the children in the eye through the glass of the car before we made away with the children.

'We also kidnapped a teacher because we thought her husband was a wealthy man, judging from the kind of car she was driving,' Sunday confessed.

Concerning their hideout, the suspected kidnapper, who told The PUNCH that he had made N80, 000 as his share of the ransom in the kidnap of the teacher and N35, 000 from the kidnapped doctor, said the gang rented an apartment in a block of four flats where their victims were kept in captivity, unknown to other occupants of the building, on one of the streets before Agip, along Sapele Road in Benin City.

The Delta State born who resided in Ondo State, said that was invited by one Tony, another leader of the gang to perpetrate the crime before he was apprehended by the SSS.

Imo approves N10b for road projects The Imo Government on Wednesday approved N10 billion for the completion of the first phase of the rural and city road projects in the state.

The state's Commissioner for Information and Strategy, Dr Theodore Ekechi, announced the approval at a news briefing after the executive council meeting in Owerri.

He said the gesture was to ensure the completion of all ongoing road projects in the state.

Ekechi said the state government also approved N300 million for the take-off of the Community Government Council secretariats in the 27 local government areas.

The commissioner said the council also agreed to set up a committee for proper harmonisation and management of the 25,000 youths employed under the Youth-Must-Work programme.

He said the committee was headed by the state's Commissioner for Youths and Sports, Mr Kenneth Emelu, with the commissioners for lands, finance, health and the permanent secretary of the ministry of local government as members.

The commissioner said the 'Youth Must Work' programme was domiciled in the office of the director general of youths.

Ekechi announced the council's approval for the disbursement of N10,000 bursary to every Imo indigene in tertiary institutions to encourage and assist them in their studies.

The council also approved the acquisition of operational vehicles for security agencies in the state to assist them fight crime.

He said the council expressed satisfaction with the performance of Gov. Rochas Okorocha in his three years in office, especially in the areas of developmental projects, free education and pledged their continued support. (NAN)