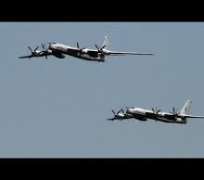 Army Col. Steve Warren, the spokesman, said the Russian Su-27 fighter flew across the nose of the U.S. Air Force RC-135U aircraft, coming within about 100 feet (30 meters), while in international airspace over the Sea of Okhotsk.

Warren said the U.S. plane did not take any evasive measures. The Russian pilot maneuvered his jet in a way that exposed its belly to the American crew, he said, apparently as a way of showing that it was armed. Warren said there was no radio communication between the two planes' crews.

He said Defense Secretary Chuck Hagel and Gen. Martin Dempsey, chairman of the Joint Chiefs of Staff, both raised the matter later with their Russian counterparts.

Warren said he could not explain why the incident, which happened April 23, was not made public earlier. It is the latest source of concern for U.S. officials since a heightening of U.S.-Russian tensions following Moscow's intervention in Ukraine. In mid-April a Russian Su-24 fighter made low-level passes over a U.S. Navy ship in the Black Sea.

The 'Combat Sent' aircraft are equipped with communications gear designed to locate and identify foreign military radar signals on land, at sea and in the air. The crew is composed of two pilots, one navigator, two airborne systems engineers, at least 10 electronic warfare officers and six or more technical and other specialists.