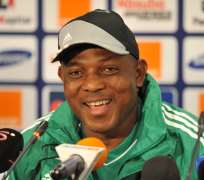 The trio of Daniel Akpeyi, Joel Obi and Nosa Igiebor were also dropped from the team.

Yobo and Odemwingie were late call-ups into the team after having fell out the Keshi but they will lead the pack along with Chelsea midfielders John Mikel Obi and Victor Moses who was on-loan at Liverpool last season.

The team features veteran players like Yobo who will be featuring in his third World Cup finals along with goalkeepers Vincent Enyeama and Austin Ejide and World Cup debutants Reuben Gabriel and Juwon Oshaniwa.

Keshi's mouthwatering front line will be Nigeria's biggest arsenal in Brazil and along with a stable midfield and defence they have been tipped to progress from the group phase by Chelsea manager Jose Mourinho.