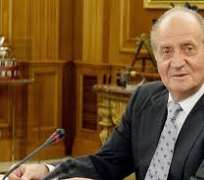 King Juan Carlos of Spain has announced his intention to abdicate, after nearly 40 years on the throne.

“A new generation must be at the forefront… younger people with new energies,” the 76-year-old king said in a televised address.

His son, Crown Prince Felipe, 45, will take over the throne.

For much of his reign, Juan Carlos was seen as one of the world’s most popular monarchs, but recently many Spaniards have lost confidence in him.

His reputation has been tarnished by a long-running corruption investigation into the business dealings of his daughter and her husband.

King Juan Carlos, 76, has had health problems in recent years

Support for the king fell further when it was discovered he had been on a lavish elephant hunting trip to Botswana in April 2012, in the middle of Spain’s financial crisis.

The first announcement about the abdication came from Prime Minister Mariano Rajoy, who told reporters: “His Majesty King Juan Carlos has just informed me of his desire to renounce the throne and begin the process of succession.”

Later, the king himself said in a televised address that it was time for a “new era” in which a new generation could take on the transformations and reforms required.

He said his son, Prince Felipe, had the maturity and preparation to be king.

Spain does not have a precise law regulating abdication and royal succession, and Mr Rajoy said ministers would hold a special meeting to discuss the process by which the prince would take over as Felipe VI.

The prime minister said Juan Carlos had been a “tireless defender of our interests”.

“I’m convinced this is the best moment for change,” he added. BBC