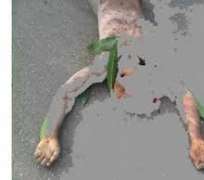 Nigeria was saved from another calamity Saturday night, when a suicide bomber's devilish mission to kill football fans in Jos failed.

The bomb exploded alright but it happened before the suicide bomber got to his target.

The explosion reverberated round the city, sending shock waves across the already traumatised city.

It forced many residents of the city of Jos to abandon the safety of their homes to seek safer grounds.

According to reports, the bomber had approached Jos viewing centre while people were watching the match between Real Madrid and Atletico Madrid, but could not get there before his car exploded.

Jos was the setting of a devastating twin blasts that killed over 100 persons only last Tuesday.

Although information about the Saturday night blast was sketchy, the bomb was said to have been planted in a car, near a car stand where some youths were watching the match.

It was gathered that the bomb exploded near a residence injuring the owner of the house and his son.

The bomber and two others died in the blast.
A resident, Sani Mudi, who lives around Bauchi road told our correspondent that all the residents of the area rushed out of their houses, trying to fathom where the bomb exploded.

In a statement on Saturday night,
Plateau State Governor, Jonah Jang, sprung swiftly into action to calm frayed nerves, urging the people of the state to remain courageous.

He said it was sad that the attack was coming barely four days after a similar one. He vowed to ensure that the masterminds are tracked down.