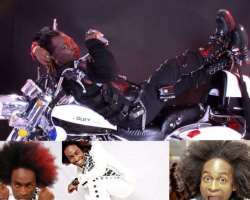 Charly Boy is one of the names one would mention and nobody would be naïve enough in Nigeria to ask – who goes by that name. He is so popular that many do not know his real names, neither is his identity a thing many can boast of. So is Denrele Edun of Soundcity.

From being the show host with the candid camera in the early 1990s; the maverick musicians, who wears military uniform around, the audacious; but well-known star that dragged over 300 people to NTA, the national television station, to encamp in front of the station and protest the transfer of his Charly Boy Show content to DStv or the act that came back in a big way with a hip song entitled 'Naija Bike' when his age was already climbing up the ladder side of the late 50s.

Not to forget his radical exploits in the popular Alaba International Market while he was the President of the Performing Musicians Association of Nigeria (PMAN) let alone having to get about two kids at the age of 21 as well as recently announcing his intention to remarry the same woman he has been living with for many years. The truth is that Charly Boy has never been an ordinary individual in any stage of his life, rather he has been an extraordinary rebel though his life.

Agreeing that most of the eccentric tendencies people see in him are not intentional, Charly Boy said he became a rebel probably because he was injected with an overdose of moral principles and, bred to accept and live within strict value systems. But the artistic propensity in him also drives his views, attitudes and often inexplicable, and downright bizarre lifestyle.

Both Denrele and Charly Boy remain young in their individual lives and have become a force to reckon with in all ramifications. Some see them as being weird, but one unique thing about them is that they have been able to blend as two individuals from two different generations though one uniqueness-weird lifestyle.

Aderenle Edun, who is well known as just 'Derenle' and Charles Oputa, who though is 57- year-old, still refers to himself as Charly Boy and 'Area Fada' among many other monikers; are two men of two different generations whose similarities, ranging from their involvement in the entertainment industry to their weird fashion sense and lifestyle, cannot be overlooked.

The older weirdo in his words doesn't see himself as a weird personality though many people would not only like to think but see and know otherwise.

“My dressing is weird. My rings, piercing all over my body could be weird and mad. But there is method in my weirdness or madness. In Nigeria, there is madness that has neither method nor pattern. It is far different from my ways. Come to think of it, is Charly Boy weird or mad when he has a family and has kept his marriage for over 30 years?”

The grandfather whose marriage was recently alleged to have crashed, albeit wrongly, still surely believes he is young and sometimes behaves like a juvenile teenager, saying that it's no big deal to adopt a style of his own; especially considering how far it has brought him.

“I am a father and grandfather. I know my roots and always in touch with the base. So, I don't know what is unusual about me for adopting just my own style of life. I dress this way because I am a biker and bikers look rugged and tough. The rings I wear have meanings. The mask is like the shield to tell the biker to be cautious for his safety while riding on the highway. The cross signs on these rings (with the heavy metals called rings, which fill his fingers) stand for spirituality to show that the biker is rugged, but knows that God exists and is great. These don't make me absurd because everything I do has a focus,” the 'Area Fada' said.

On his own, Derenle said: “I don't know where the craze came from. “I was just seeing craze from another perspective and was just carving out an identity for myself. “For me, it was all about the cloths and the attitude. And it's all about building a brand. But at the point when I started, it was just like being different from the next person.

“I believe, it's good for me to do things differently and that is what I'm known for now. I'm a very scattered person, some even think that I was a drug addict. Whereas I don't smoke or drink. I decided to turn this negativity into positivity. As long as people are talking about you, it shows that they acknowledge your existence.”

But probably more than Charly Boy, Denrele has paid dearly at times for his weird ways, saying that the only people that seem comfortable with what he was trying to do and understood it in time being members of his family. He confessed that growing up in this kind of environment was not rosy for him.

Perhaps, different from Charly Boy on that count; Denrele had to pay his way through school, and suffered the jeers and abuses of fellow course mates; especially the vacation of spaces around him by other commuters whenever he boarded a bus back in his days of having public option of transportation as the only one opened to him.

Edun, who was discovered as a model by popular designer, Kese Jabari, added: “Sometimes I'm an angel, sometimes I am a devil. “Sometimes I'm in-between. “Sometimes I'm a million colours and sometimes I am black and white. But the thing is you can never figure me out. I am very wild and also unpredictable. The truth that is I do things just to please myself. I can be as bad as it can get, as good as it can be and I am always ready to work. My greatest fear is not having work to do. I am a fun-loving person. I am a bit two-faced. When I'm going through problems, I mask it. I don't want people to know because people look at me to make them happy. So, I always try my best to put up a smile for everyone.”

Like a prophecy whose fulfillment was being eagerly awaited, the coming together (at least on the front cover of the all new Charly Boy magazine) of prodigiously eccentric Charly Boy, who was recently slammed with being blacklisted by a frontline airline in the country, and Denrele, who is trailed everywhere by controversies of being gay even more than his shadow, is no surprise. That is if one takes cognisance of their lifestyle, thinking and even the grossly outrageous dressing and however one looks at it, they are really two of the weird ones from two generations. What synergy would develop is what many are watching out for.