10 richest Nigerian comedians and their sources of wealth 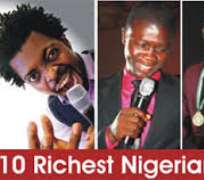 Comedians are meant to be funny, right? Yes, the stand-up comedians dominating Nigeria's humour business landscape are funny quite alright on stage, but very serious in business.

n
With assets running into billions of naira, they are light years apart from the past crops of old comedians who wait on people for meager rations of life.

They may look funny and unserious, but they are cavorting to the bank and living their dreams. Ali Baba, the father of stand-up comedians in Nigeria, aptly captured in words, the profitability of comedy business when he said: 'comedy is a funny business, a very big business.'

After a careful study of the careers of these successful comedians, Showtime came to the conclusion that a number of them are outstanding. Here are the top 10 in this branch of entertainment in terms of their assets, the money they charge per show, the various products or corporate endorsements they did, and their established brands from which they make steady income.

Alibaba:
With over thirty years of performing on stage and hosting events for almost all Nigeria's former presidents and the present one, Ali Baba sits at the apex. Even President Olusegun Obasanjo once jokingly accused him of being overpaid for his performance. His Lekki mansion where he lives is said to be worth more than N300 million alone.

Alibaba makes his money through a chain of businesses in Lagos: as a reputed motivational speaker, a professional comedian patronised by almost all the big brands and political bigwigs in the country. His net worth is estimated to be over 3 billion naira. It is estimated that he performs in a minimum of two events weekly at an average rate of 4 to 4.5million naira per event. That would add up to about 400 million naira per annum!

n
Basketmouth:
He has been associated with many companies, signing different endorsement contracts in the last six years. He also has an impressive list of branding deals with Amstel Malta, Globacom Ltd. and a host of others. With his sold-out shows in South African, London, and even in far away America, and on his Basketmouth Uncensored platform, the comedian has been so consistent since he came to limelight.

n
I Go Dye:
United Nations Millennium Developmental Goal Ambassador, Amb. Francis Agoda, fondly called I Go Dye is the C.E.O of Revamp Construction Company, a property, real estate and road Construction Company. An estimate of his annual income stands between 350 and 500million naira, while his net worth is valued at over 2 billion naira. With properties in choice areas across Nigeria, and fleet of luxury cars, he is the man to beat. He also has a special performing relationship with almost all the governors in the country. His business empire is increasing every day. Presently, he is constructing a bottle water company, Franstel Natural Bottle Water.

n
Julius Agwu:
He made over 20 million naira alone from the launch of his book when he turned 40. He has properties scattered all over the country, a state-of-the-art audio and video studio, and more political affiliates than any other comedian.

For over a decade now, Julius Agwu has been organising two events: Crack Your Ribs and Laugh for Christ Sake. He is reputed to own properties in 3 states in Nigeria, and is also the C.E.O of Real Laff Entertainment Company which is an event management firm. His performance fee is between 2 to 3million naira per event, and his annual take-home is estimated at 180million while his personally organised events are estimated to be about 140 million annually. His net worth is valued to be 1.5 billion naira.

AY:
Since his foray into this money making business, he has risen faster than anticipated with a performance fee that is between 1 and 2 million naira per event, while his A.Y Live events organised annually rakes in 160 million annually. He is said to be earning 280 million naira annually. His net worth is put at 800 million naira. He is also working on his MVP club and also runs an event company. He also has fleets of cars and properties at Lekki area in Lagos.

Gbenga Adeyinka : No comedian anchors more events than him presently. He is constantly busy and a top choice with politicians. He has properties and several business interests besides his Laffmattaz which is always a sold-out show with more than 5000 people in attendance every year.

Gbenga Adeyinka:
No comedian anchors more events than him presently. He is constantly busy and a top choice with politicians.He has properties and several business interests besides his Laffmattaz which is always a sold out show with more than 5000 people in attendance every year

Okey Bakaasi:
He anchors upscale events steadily and must have made huge money from politics too as Senior Special Assistant on entertainment in Imo State. He has a mansion in Imo State and Canada.

TEE-A:
A highly gifted wedding MC, he has equipment and an events company. He anchors mainly heightened events and also does private businesses

BOVI:
He has made a lot of money lately from events, adverts and tours. He is probably the hottest kid right now.

YAW
Yaw is into the big league with a choice property in Lagos. He also makes money from MTN adverts, radio presentations, radio hypes, anchoring events, equipment leasing and other businesses.