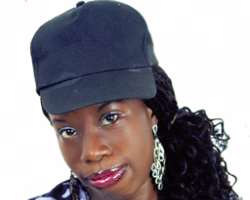 Born Olufunmilayo Modupe George, the Microbiology graduate of the University of Agriculture Abeokuta, is out to make a mark with her gospel hip-hop, fused with rap, R&B, dancehall and a bit of highlife. Popularly called F-STINCT on the music scene, Funmi, who is currently working on her debut album, The Quest, speaks to DANIEL ANAZIA on her plans to pass the message of Jesus Christ to the young generation through her music.

Growing up was fun because I have a close-knit family. I'm the first girl and second child in a family of five –– two girls and a boy. I'm a Lagosian, but was born in Ibadan . My formative years, was in the ancient town of Ibadan , though I proceeded to Abeokuta for my higher education.

How it did you get into music?

We are musically inclined in my family; everyone in the family has unique musical ability that stands him/her out. My dad, mum and siblings have natural music abilities. I started singing from a very tender age; I was involved in various musical groups both within and outside the church. While I was at UNAAB, I was a member of a four-man group, The Revelators. It was a gospel hip-hip group and we performed within and outside the campus.

What is your style of music?

I'm a hip-hop artiste; I do more of gospel hip-hop, R&B, and rap. I intend exploring a variety of other musical styles by infusing different beats and genres into my own style. The aim is to develop my creativity. When I say different beats, I mean highlife, dancehall and other beats, which I'm working on right now.

Any major concert/performance so far?

Not really mega events like The Experience, MTN Music Festival and others, but I've performed at the DJ Gosporella's Mixtape, Combo Phonix Jamz, One-Stick Music Concert and so many church appearances.

Your upcoming album, The Quest, what is it all about?

Our society is filled with so much moral decadence, especially among the youths. I intend to reduce this through my kind of music by passing on the gospel of Jesus Christ to this generation in a way the youth will understand it. It is also a pursuit of an ambition. All these immoralities such as prostitution, armed robbery, drug trafficking… are geared towards the 'get rich-quick' syndrome, which is common among Nigerian youths today. Shortcut and straight-forwardness are two parallel lines that can never meet.

So, when is it hitting music shelves?

It's going to be a 9-track work, but with lots of varieties. It will be in the market before the third quarter of the year. We are seriously working on it and when it finally comes, it's going to be a bomb.

Who are your influences?

…The likes of Kirk Franklin, Cece Winnas and Cross Movement influence me a lot. Trigga, MC Loph, Willisino are my pals in the industry.

What would you want to be remembered for?

(Laughs), with the help of God, I hope to build a lasting career in music, especially in gospel genre. Through my message, I want to influence the youth positively. I also hope to set up a non-governmental organisation that will focus on the youths with unique talents, nurture and help bring them to limelight. I will like to have a standard gospel Nite Club, where Christians could hangout like we have in conventional clubs.