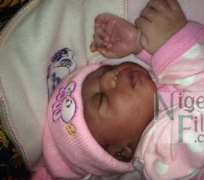 Prolific Nollywood director, Afam Okereke is presently in a joyful mood, Nollywoodgists.com can authoritatively confirm. Afam, as he is well known in the Nigerian film industry called Nollywood, welcomed a cute bouncing baby girl from his pretty wife.

The celebrated and respected movie director got the bundle of joy from his wife on Saturday, May 17, 2014 at about 7:25pm. The child was given birth to at a hospital in Enugu.

For some time now, Afam has not been too active in the movie industry after he took a job from the present Governor of Enugu State, Chime Sullivan as his Senior Special Assistant on Media.

He was thereafter elected by his people as Chairman, Nkanu West Local Government Area of Enugu State.

Meanwhile, Nollywoodgists.com has learnt that the new born baby is in good condition as well as her mother.