West to get tough with Boko Haram: French President 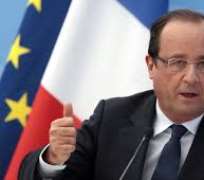 The U.S. and its allies agreed to crack down on Nigerian insurgent group Boko Haram, French President Francois Hollande said Saturday after a meeting with Nigerian President Goodluck Jonathan. “Today we've decided on a plan of regional and global action that is medium and long term,” Hollande said at a news conference, according to The Wall Street Journal http://online.wsj.com/news/articles/SB10001424052702304908304579567853886627212?mod=WSJ_hp_LEFTTopStories&mg=reno64-wsj . Hollande and Johnathan met to discuss how to rescue the hundreds of girls kidnapped by the group. Hollande said the plan will see Western powers cooperating with Nigeria and neighboring countries in surveillance and patrols along Nigeria's borders, while Western powers with sophisticated intelligence-gathering capabilities have agreed to share some information with Nigeria.

British Foreign Minister William Hague, speaking before the start of a meeting of Western and African leaders in Paris, said the Nigerian military was not organized in a way to deal effectively with the Islamist group.

French President Francois Hollande told the meeting that Boko Haram was now a threat to all Western and Central Africa – a point that was supported by reports of a suspected Boko Haram attack on a Chinese work site in Cameroon on Friday might.

Although Boko Haram have been fighting for five years, carrying out many bombings and attacks on civilians as well as security forces, the kidnapping last month of more than 200 girls from a school in Chibok, northeast Nigeria, has focused world attention on them.

Outrage over the mass abduction prompted Nigerian President Goodluck Jonathan – criticized at home for his government's slow response – to accept U.S., British and French intelligence help in the hunt for the girls.

France, itself a target of Islamist militants for its military intervention against rebels in Mali, brought together Nigeria's neighbors Chad, Cameroon, Niger and Benin, and Western officials for the Paris meeting to try to improve cooperation in the fight against the militants.

“Nigerian security forces have not been well structured for this kind of thing and that has been shown by the problem getting worse,” Hague told reporters.

“We can help with that which is why we are offering to embed military advisers within the Nigerian headquarters.”

…
But Nigeria must still lead the way, he said.
“Nigeria has the main responsibility and must be the leading nation in tackling this and that includes to mount an effective security response and improve development,” he said.

The Nigerian military must uphold human rights as it goes about its task, the British minister added.

With about 6,000 French troops operating in either Mali to the northwest or the Central African Republic to the east, Paris has a big interest in preventing a deterioration in Nigeria's security.

It fears Boko Haram could spread north into the Sahel and beyond Cameroon into the Central African Republic.

“Boko Haram is a major threat for all of western Africa and now central Africa with proven links to AQIM (al Qaeda in the Islamic Maghreb) and other terrorist organizations,” Hollande said.

French diplomats have ruled out any Western military operation but said they expected a regional plan to take shape for countering Boko Haram.

“A comprehensive plan needs to be put in place from exchanging information to coordinating action and controlling borders,” Hollande said.

attacked a Chinese work site in northern Cameroon on Friday and at least 10 people are believed to have been kidnapped, the regional governor said.

The group has killed more than 3,000 people in its war to establish an Islamic state in mostly Muslim northeast Nigeria.

“The first focus is about the girls, but that requires these countries work together particularly Cameroon and Nigeria who have not enjoyed strong, positive relations in recent years,” Hague said.