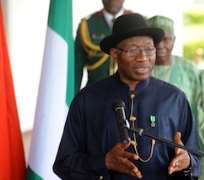 President Goodluck Jonathan has appealed to Nigerians to be calm and prayerful as Government intensifies efforts to wipe out terrorism ravaging parts of the country.

Jonathan made the appeal in Abuja today at the opening of the 2014 Synod of the Abuja Diocese (Anglican Communion).

Represented by the Minister of Power, Prof. Chinedu Nebo, Jonathan urged Nigerians not to despair in the face of terror but to rise stronger against the insurgents and their sponsors.

He assured that Nigeria would emerge stronger and better when the insurgents were eventually defeated.

Jonathan said the collective will of the majority is greater than the interest of a few persons.

“These threats to our society should not be taken lightly by citizens; we must all rise strongly against our enemies.

“I must also state categorically that Nigeria will get to the Promise Land in spite of the setbacks, we are already on the right path and we must surely move forward as a nation'', he said.

Jonathan thanked the Church for the prayers and urged them not to relent and expressed hope that the present challenges would soon be addressed.

Primate of Nigeria (Anglican Communion), the Most Reverend Nicholas Okoh, urged Nigerians to support the federal government in tackling challenges confronting the nation.

Okoh stressed the need for Nigerians of different religious and political backgrounds to put sentiments aside and join the fight against ills in the society.

The primate, who spoke on a wide range of national issues, welcomed the proposal by President Goodluck Jonathan for the extension of emergency rule in Borno, Adamawa and Yobe States.

“For me, the country should consider the benefits of the emergency rule in the states where the insurgents have held sway.

“In a situation where it is ascertained that the emergency rule has helped, the legislature should not waste time to approve the President's proposal. As long as our problems have not been solved, emergency rule should continue,” he said.