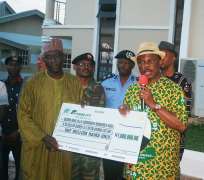 Anambra State governor, Chief Willie Obiano has presented a cheque of one million naira to the family of a Nigerian soldier, Corporal Muhammed Gana who died in active service in the state.

The deceased, Corporal Gana from Gombe State was attached to the three-zero-two (302) Artillery Regiment Onitsha and was killed on the 19th of March this year by a speeding vehicle while on duty close to Anambra - Imo boarder along the Onitsha-Owerri Road.

Governor Obiano who presented the cheque to the next of kin of the deceased at his country home in Aguleri, Aguleri, Anambra East local government area, said the gesture was to appreciate the contributions of the late soldier to the security of life and property in the state.

He assured all security agents working in the state that his administration would continue to protect their interest as well as give them necessary motivation and incentives to work diligently.

Responding to the governor's kind gesture, the commander 302 Artillery Regiment Onitsha, Colonel A.J. Fagge expressed gratitude and reassured him that they were poised to make the state a shining example in the security of lives and property in Nigeria.

Also speaking, the State Commissioner of Police, Mr. Usman Gwary cautioned fleeing criminals not to come back Anambra State as there was no more hiding place for them in the state.

Responding on behalf of the deceased family, Mallam Kachism Gana said the family of the fallen hero would forever remain grateful to the state governor for the gesture, assuring that the money would be put to good use.