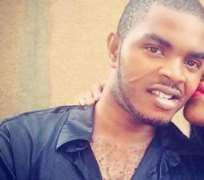 Some weeks ago, Nigerian actress, Angela Okorie was in a mess after she was accused of stealing $3,200 in South Africa from a guy named Prosper. She was also accused of sleeping with the same guy, but soon after, she posted a picture of herself and her husband. Before then, it was speculated that her marriage may be sitting on the edge of the knife due to the scandals.

Her husband, Chukwuma Orizu, speaking with Encomium Magazine, said that their marriage is "intact". He defended his wife, asserting that Angela is innocent and that he knows her better than anyone else.

According to the man, those spreading the rumour just want to tarnish his wife's image, stressing that he is very sure that Angela didn't do it was she was accused of.

He also stated that several people have been calling him, saying all sorts of things to him and that he told them that he knows his wife very well. He also pointed out that he knows that all they want is to break their marriage.

He maintained that his marriage is very much intact and that he can't chase his wife away because of a mere rumour from people who don't know her more than him.