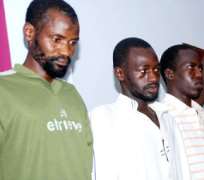 Barely one month after the deadly bomb blast at the El-Rufai Motor Park, Nyanya in Abuja on April 14, 2014, the  Department of State Service has arrested five  persons  in connection with the blast that claimed several lives.


The  DSS Deputy Director, Public Relations, Marilyn Ogar,  who paraded the suspects in Abuja  on Monday,  said the masterminds of the blast, Rufai Tsiga (aka Dr. Tsiga), and a military deserter, Aminu  Ogwuche, had been declared wanted.


Ogar  announced a cash reward of N25m  for information that could lead to their arrest.


She also  explained that Ogwuche with service number SVC 95/104 served in the intelligence unit of the Nigeria Army at Child Avenue, Arakan Barracks, Lagos between 2001 and 2006 and was posted to the Nigerian Defence Academy in 2006.


According to her, Ogwuche was  once arrested on November 12, 2011 at the Nnamdi Azikiwe International Airport, Abuja, on his arrival from the United Kingdom, for suspected involvement in terrorism-related activities.


She added that he  was   released on bail on October 15, 2012 to his father, Col. Agene Ogwuche (retd.), following intense pressure from human rights activists who alleged human rights violation.


The DSS spokesperson further explained that investigation indicated that Tsiga and Ishaq moved a vehicle laden with explosives to the El-Rufai Motor Park  on April 13,2014 night.


'In the morning of April 14, Tsiga moved the explosives-laden vehicles to the position from where he detonated them,' she added.


Ogar stated that Abubakar, who was arrested on April 22, 2014 at Gwantu, Sanga Local Government Area of Kaduna State, told interrogators that Tsiga confirmed to him that he (Tsiga) and other members of the Boko Haram carried out the attack on the  motor park.


She said, 'According to Abubakar, Tsiga also told him that  the Boko Haram leader had directed that all members of the sect should relocate with their families to 'Gaaba' (Boko Haram forest camp) in preparation for mass attacks against the Nigerian state.'


The clinic served as a base for Boko Haram's covert activities in the FCT.


Ogar said,'Ishaq revealed that two days before the Nyanya blast, Tsiga   informed him around  4pm  after prayers that there was a plan to bomb a facility in Abuja, but stated that he was never informed of the exact location.


'He further revealed that Tsiga later informed him that the bombs to be used for the blast were being coupled at the residence of one Adamu Yusuf and a day before the blast, he and Tsiga drove the car laden with explosives and parked it behind four buses inside the motor  park in Nyanya overnight, after which they left the area.'


Yusuf, who denied involvement in the blast, admitted to journalists that he was a former member of the sect.


Yusuf, also a former  cleric at the Finance Quarters Mosque, Wuse in  Abuja,   identified other terror suspects as members of Boko  Haram.