Those Who Honoured Genevieve Nnaji At 35th Birthday Party 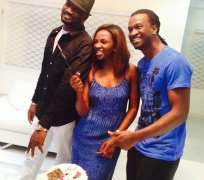 The Etisalat brand ambassador was born on May 3, 1979. Instead of celebrating herself, Genny as she is fondly called by close pals, is still grieving over the missing schoolgirls in Borno state. In her birthday message, the Imo born actress begs the government to do everything possible to rescue the girls, as their abduction goes against everything Africans have fought for.