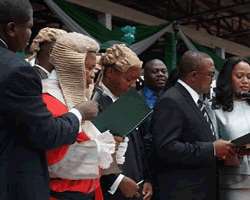 From CHIDI NNADI and GEOFFREY ANYANWU, Awka
Thursday, March 18, 2010
Anambra State Governor Peter Obi taking the oath of office for a second term in Akwa, Wednesday. He is assisted by his wife, Margaret

Obi was declared winner by the Independent National Electoral Commission (INEC) after the February 6, gubernatorial election, having polled a total of 97,843 votes as against Action Congress, Dr. Chris Ngige's 60,240 votes, which put him at a distant second position. A total of 1.8 million voters were registered by INEC for the election.

In his goodwill message at the inauguration ceremony, Acting President, Goodluck Jonathan, said that he was happy to be part of the unique and historic occasion which was the outcome of a remarkable electioneering process in the annals of the country's democratic process.

'I wish to most heartily congratulate Your Excellency for this remarkable victory at the polls and commend your abiding faith in our constitutional democracy.

'It is our fervent prayer that the Almighty God will continue to sustain the peace and progress that has characterised governance in Anambra State under your charge,' Jonathan said.

The acting president, who was represented at the occasion by the Governor of Abia State, Chief Theodore Orji said he was delighted to have been invited to the occasion just as he wished Obi well as he began his second term in office.

Also speaking, the Senate President, David Mark, noted that the peaceful manner in which the Anambra election was conducted was commendable, saying that the exercise was a good signal that the next general elections in 2011 would turn out to be even more transparent, peaceful and efficient.

'Your re-election justified the confidence of the people of Anambra State in you; this, no doubt, was based on your astute performance and commitment to the upliftment of the basic welfare of the entire people during your first tenure,' he said.

Mark, who was represented at the occasion by the Chairman, Senate Committee on Education, Senator Joy Emordi, advised Obi to keep up the good work he was doing in the state, saying that this was important in order to advance and consolidate on the successful record of his performance.

He urged him to continue to operate an inclusive mandate that would take cognisance of the views and expectations of all stakeholders.

Mark added that he was certain that Obi would work even harder to break new grounds in the interest of all Anambrarians, their happiness and overall development.

Governor Obi, in his inaugural speech after the swearing-in ceremony, thanked the people of Anambra State for the great trust, overwhelming support and solidarity they gave to him at the polls, hoping that they would remain available as they continue in the great task of building the state.

'My dear Ndi Anambra, today belongs to all of us. Today, with my swearing-in as the first governor produced through a staggered election, history has been made in Nigeria. This, in truth, is one of the ingredients of true federalism. Today's celebration is memorable because, contrary to the predictions of pessimists that the February 6 election would be marred by a break-down of law and order, it ended up very peacefully, for which we remain thankful to the Independent National Electoral Commission (INEC), the security agencies, bodies and observer-groups that contributed in various ways to the success of the election.

'The election has, therefore, confirmed our abilities, in spite of all shortcomings, to do things in a civilized and peaceful way. This sacrifice by the people of Anambra State in ensuring a peaceful and exemplary election has proved that we are, indeed, the light of the nation.'

Obi reminded the people that the journey of his administration, right from his first tenure till now had been historic and chequered.

His words: 'It was one mingled with hope and despair. When you recall our three years of legal battles in the courts, the impeachment saga and attempted tenure abridgement, which eventually led to the Supreme Court of Nigeria's interpretation of the tenure of the governor, you will appreciate the trials we passed through. God, in His Infinite mercy, through the judiciary, has always seen us through.

'Notwithstanding the above constraints, we began the simultaneous rebuilding of all sectors of the state's economy with the vision of achieving the Millennium Development Goals (MDGs) by the year 2015, working through our delivery strategy of Anambra Integrated Development Strategy (ANIDS). As we look back today, there is no sector or community in the state that has not benefited from this government in one area of development or another, be it in the area of healthcare delivery or education or urban development or control of erosion or reconstruction of roads or sports, among others.'

The governor pointed out that looking around the state shows that challenges still abound which made him to add that in 'this second tenure, the journey will be tough.'

He, however, assured them that 'while we may not solve all the problems overnight or achieve 100 per cent result, we shall continue to put in 100 per cent effort,' adding that they would continue to lead a government that is accountable to all.

Hear him: 'We shall continue to manage the resources of the state judiciously, laying a foundation that would make successive governments less encumbered in the business of moving the state forward. Our state shall once again assume a position of importance in its contributions to the building of our country, to the benefit of our children.'

He, therefore, invited all those that contested against him in the election to unclench their fists of contest and join hands with him to restore the state to its pride of place.

Obi thanked his former deputy, Dame Virgy Etiaba, for her services to the state, wishing her well in her future undertakings, saying that she was still part of the government and the APGA family.