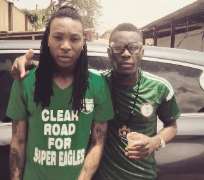 Solidstar is shooting the music video at the Onikan Stadium, Lagos along with his younger brother, Jojo, who is an up and coming artiste signed under Solidstar's record label, 'Badass Music'. The singers wore the Nigerian jerseys for the shoot.

Some popular comedians, music acts and movie stars are also expected to join in the music video. Solidstar was recently made an ambassador of the Supporters' Club.