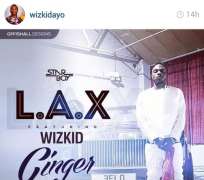 One of the Star Boy record label artiste L.A.X, is ready to with a track song titled 'Ginger,'which is believe is going to be a club banger.

The song produced by Legendury Beats, features Wizkid and is expected to be released within the next 10 days with a video, according to Wizkid's post.

It would be recalled that towards the end of 2013, L.A.X had released a hit single 'CARO,' which was and is still a club banger and he also features his boss Wizkid on the track.