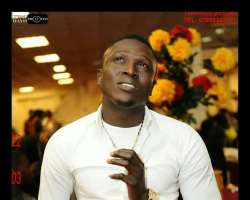 Sulaiman Adigun popularly known as Paso-poly has returned from his six months musical tour in Europe. While in Europe, he dazzled his numerous fans over there with his delightful Fuji tunes. So impressed were the fans that the gist in their lips was that just like the king of Fuji music, Wasiu Omogbolahan Ayinde aka K1 has a protégée who is doing very well in his lifetime in the person of Kolade Onanuga aka K2, the same thing goes for Wasiu Alabi aka Pasuma as he's protégée in the person of Paso-poly has already come to stay.

On his arrival at the Muritala Mohammed Airport, Ikeja, Lagos last week, Paso-poly while addressing a group of his supporters who had besieged the airport to welcome him said he is not mimicking Pasuma as a lot of people will want to see it rather, he is closely following the legacy Pasuma has already laid down using Pasuma's style of Fuji coupled with his voice as his own personal unique style as the medium.

According to him, he stated that 'Wasiu Alabi Pasuma is someone I respect so much and I will continue to respect him as long as I breathe. He is who I refer to as my foundation and leader. He is someone that I have benefited immensely from, as such I give it to him'.

Speaking further on his projections, he said apart from his latest video CD already in circulation titled 'Carbon-copy' featuring notable broadcasters, actors and musicians, will soon be release and his new audio CD which already has the working title 'UK BOI' before he returns to Europe for this year musical summer tour.