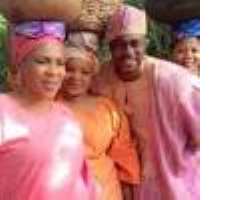 Nollywood actress and ex-wife of Saheed Balogun, now Fathia Williams, has added another credit to what she knows how to do best as she won the best Actress award as against star Actresses Funke Akindele, Iyabo Ojo and Ayo Adesanyo.

Members of the Yoruba film industry gathered at the Ibadan Civic Centre in Agodi for the third edition of the annual Yoruba Movies Academy Awards (YMAA) on Sunday.

The YMAA is annually put together to celebrate all the success stories of the Yoruba movie industry.