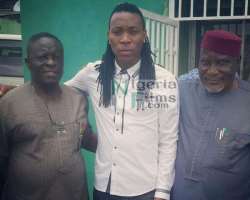 From what we gathered, the artiste would record the official theme song for the Super Eagles ahead of the 2014 World Cup in Brazil.

Dr. Rafiu Oladipo, who is the president of the Supporters' Club, represented the NFF. He said, 'we needed someone one who was passionate about Nigeria football and who has that gyration in his voice and who the new  and old generation can relate to and it was just Solidstar that came to mind.'

The song is to unite and inspire the players on and off the pitch and also the country.

SolidStar remarked that he is humbled by Dr. Oladipo's kind words and promised that he won't disappoint in the new project.