Nobody Can Break Nigeria - Gani Adams 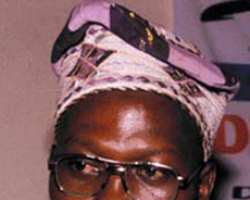 BEVERLY HILLS, CA, March 27, (THEWILL) - A delegate to the ongoing National Conference and the National Coordinator of the Oodua Peoples Conference, (OPC), Chief Gani Adams, has cautioned that the Yoruba nation would not be threatened with secession, insisting that nobody can break the country.

Adams stated this in Lagos on Thursday, while reacting to the threat by the Lamido of Adamawa, Muhammadu Bakindo Aliu Musdafa, on the floor of the conference on Wednesday, that he and his people were ready to join their kinsmen in Cameroon.

Speaking on his arrival from Abuja following the adjournment of the Conference till Monday, Adams said the Yoruba nation can develop independently without relying on the Federal Government even as he noted that the nation would only move forward as one entity.

He recalled how the late sage, Chief Obafemi Awolowo, developed the South West with funds realised from agricultural produce , saying over 80 per cent of developments in the South West were due to individual efforts and not by government.

Maintaining that he was ready to die rather than betray the Yoruba cause at the National Conference, Adams challenged the Yoruba people to watch and monitor their delegates even as he alleged that a few of the delegates from the region were there on selfish interest.

'We the Yoruba people want to remain in Nigeria, but we shouldn't be threatened.

We didn't have oil in 1954 to 1959, but we all know what Chief Obafemi Awolowo did for this nation through the Western Region Government and when you study the Yoruba very carefully, our developments usually come from 80 per cent individuals and not government.

He lamented that the Lamido of Adamawa who is one of the most respected Emirs in the North could utter such statement at the conference.

'I was highly disappointed about his statement; an eminent royal father like the Lamido of Adamawa ought not to make such a statement.

He is one of the most respected Emirs we have in Nigeria today.

He should be the number five most recognised Emir in the country.

I seize this opportunity to appeal to the royal fathers, including the Emir to watch their statements.

Nobody should threaten the unity of Nigeria, we want Nigeria, but we should not be threatened.

'We the Yoruba people want to remain in Nigeria, but we shouldn't be threatened.

It is the North that depends on the government, they don't need Nigeria more than us, but we all need Nigeria because we have inter-married, done businesses together and Abuja has brought us together.

There is a lot of interest between the six geo-political zones and Abuja and Lagos.

It will be better for us to have one Nigeria so that our population can speak for us wherever we are,' he said.

On the no-go areas at the conference, Adams said the delegates agreed with President Goodluck Jonathan on this and insisted that the unity of the country must be sustained by all means.

He however noted that for Nigeria to remain as an indivisible entity , negotiation and restructuring of the entire system must be agreed upon, stressing that anyone who says the status quo should remain is an enemy of the country.

'Nobody will want Nigeria to break, but we have to negotiate Nigeria.

When you have a relationship with some people for 100 years, you are not moving forward and you are gradually becoming a laughing stock in the comity of nations.

We must learn to live on the principle of justice, equity and not be selfish.

We have equal citizens in USA, but the reverse is the case here.

If you go to some places in this country, if you don't speak their language, you cannot get a job or even get promoted.

All our appointments are usually lopsided,' he added.