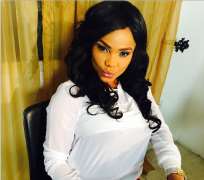 Iyabo Ojo is one popular movie star who has turned out to become very successful in the film industry.

Her achievements have taken her from the terrain of acting to that of producing movies and now to floating a beauty spa in Ikeja area of Lagos.

The single mother of two, who recently dropped her ex-husband's name and reverted to her own surname, Ogunro, released some new photographs of hers.