Waje Hides Daughter’s Father Identity, Opens Up on Her Age 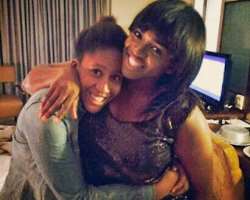 Single popular Nigerian Songstress, Waje has finally come out to disclose her true age to the public.
The Glo ambassador announced that her she is 33years old when she was questioned by a fan, how old she is.

The mother of one went on to disclose that, it is her true age and never an official age.

She further went on to say, that she gave birth to her child Emerald, when she was 17years old, and that her daughter, Emerald, just clocked 15years recently.