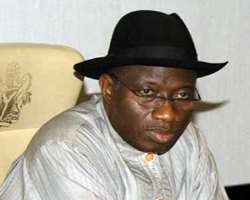 "One thing that is dear to Nigerians is the Ajaokuta Steel Complex and until we revive that complex, we cannot talk about Vision 20:2020.

The above statement was made by President Goodluck Jonathan at his Presidential electioneering campaign rally in 2011 in Lokoja, Kogi State capital. This assertion by Jonathan, no doubt, clearly agrees with the position of many Nigerians on the need to advance the country's economy through the entrenchment of a vibrant and viable steel sector. But what baffles most observers is that after three years of making such pronouncement, nothing much seems to have been done by the President for the completion of Ajaokuta Steel Company Limited (ASCL).

Vice Chairman, Senate Committee on Niger Delta Affairs, Senator Nurudeen Abatemi-Usman, for instance, said recently that Jonathan has not shown enough commitment to steel development in Nigeria. He made the observation, while condemning the zero allocation for capital projects in Ajaokuta Steel Company in the 2014 budget proposal, during the budget defence of Ministry of Mines and Steel, conducted by Senate Committee on Power and Steel.

Abatemi-Usman, a member of Peoples Democratic Party, PDP, representing Kogi Central Senatorial District, where the Ajaokuta Steel firm is located, noted that steel development is the bedrock of any industrial revolution, wondering how the federal government wants to achieve the vision 20:2020 without the full operation of the largest steel complex in the Sub-Saharan Africa.

Questioning the Minister of Mines and Steel, Architect Musa Mohammed Sada at the budget defence, Senator Abatemi-Usman said: "We spent billions for staff salaries every year, yet we are where we were as far as the revitalization of the Ajaokuta Steel Complex and National Iron Ore Mining Company (NIOMCO) are concerned. Where is the place of Ajaokuta Steel in our bid for industrial revolution? Do we seem to understand the importance of steel and the significant role it can play in enhancing our economy? If you ask me, I will say Mr. President is just paying lip service to the issue of Ajaokuta steel and steel development in general. When he (Jonathan) came to Lokoja, Kogi State during the electioneering period in 2011, the thrust of his campaign promises for which our people voted for him was his pledge to revive the Ajaokuta Steel Complex. Over three years down the line, we've not seen much from him in that regard."

Responding, Sada insisted that despite the fact that fund was yet to be allocated for the completion of Ajaokuta Steel, the Federal Government (FG) remains fully committed to the revival of the steel outfit. He explained that government was working hard to clear some of the issues impeding the actualization of the steel project.

Senator Abatemi-Usman, who has become a known campaigner for steel development and has never relented in drawing the attention of Jonathan to the need for the completion of Ajaokuta Steel Company, had equally suggested that FG should source for one billion dollars loan to revamp the steel firm. He made this suggestion last year at an interactive session with the Mines and Steel Minister in Abuja, perhaps, as an alternative means of ensuring the actualization of the steel project, for which the government has refused to allocate money for its completion over the years.

The neglect of Ajaokuta Steel by successive governments has always been an issue of great concern to most Nigerians. Many believed that corruption and lack of political will on the part of government may have been responsible for the non-completion of the project, whose contract was awarded since in the 70s.

Senate Leader, Senator Victor Ndoma-Egba, is one of those who believe that corruption has been a major factor militating against the completion of the Ajaokuta Steel Complex. The Senator representing Cross River Central in the Red Chamber had in an interview last year said but for corruption, the project, which was started almost 40 years ago, would have been completed.

Obviously worried by the pitiable condition of the steel company, believed to have the capacity of creating over two million jobs for Nigerians, he said: "I feel sad each time I remember the story of Ajaokuta Steel Company. The project was started when I was an undergraduate. In a few years, I would be a graduate of 40 years. Yet, the project is still ongoing. That the company hasn't functioned is as a result of corruption. For Heaven's sake, even for the pride of the nation, I think the project has dragged on for too long that we should be embarrassed that almost 40 years later, we are still talking about an uncompleted Ajaokuta Steel Company."

On whether he agreed with the argument in some quarters that there were external forces teaming up with some selfish individuals within the country to discourage the government from completing the project, Ndoma-Egba said, "I don't have evidence. I don't have any fact. So, I can't draw a conclusion. But one thing I can say with certainty, if we are determined to complete Ajaokuta Steel Company, we will complete it, external forces notwithstanding. I mean, no amount of external forces should stop the completion of a project capable of bringing transformation and advancement to our economy."

As noted in one of my previous write-ups on this issue, captioned:

"Ajaokuta Steel: An abandoned national treasure", it is indeed unimaginable that a project which has reached 98% technical completion as at 1992, after engulfing over $5 billion with just about $1 billion to see it through, has been recklessly abandoned all these years.

We must understand the fact, as accentuated by Abatemi-Usman that the continued refusal by the federal government to make funds available for the completion of Ajaokuta Steel is really not good for the growth and development of the steel industry in Nigeria. Jonathan must be resolute in making the actualization of the Ajaokuta Steel project a dream come true. Mr. President should know he would forever be remembered and have his name written in the Guinness Book of Records, if only he could do everything within his power to give us a completed and fully operational Ajaokuta Steel Company in his time.

It is expected that the National Assembly as the lawmaking body should be able to do something about the inclusion of allocation for the completion of Ajaokuta Steel in the country's budget. For all intents and purposes, our federal parliamentarians at the two chambers should, as a matter of urgency, make provisions for Ajaokuta Steel and NIOMCO in the current budget before them and pass a resolution on why the President must execute the project.