…Our society hates to be told the truth, says producer
By ModernGhana 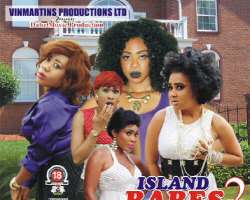 Basically about young girls' lifestyle as wannabes in the society, the movie went a long way to unveil what they do, not minding the attached risk and challenges to make fortunes in life, so to be seen on the list of most affluent.

Produced by Dabby Chimere of Dabz Movies, it had Lagos based actress, Moyo Lawal making her role to be absolutely real, even as she portrayed nude in some key scenes which however made the movie an eyesore to the rating of most critics.

Based on this backdrop, Dabby explains to enraged fans, especially parents who frowned at the exposing scenes which would slack the movie's way of entering into various responsible homes with children:

“We actually wanted to get our message right, by hitting the nail on its head. Let the society know the raw truth about life. If we don't expose some of these irregularities through art, I don't think anyone else can do it for us. So far, we've studied our critics and we will continue to tell them the truth”, she said.