Tonto Dikeh Warns Her Fans To Stay Away From Tattoos 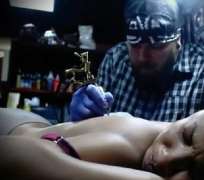 Controversial Nollywood actress, Tonto Dikeh, seems to be regretting her actions on what she faced while she was drawing tattoos on her body, according to her it wasn't funny atall and she has warned her fans to avoid tattoos. Hear her:

“Stay away from tattoos, don't bother to have any not even little because the moment you do, you keep on going for more.”

She also shared a photo story of how she shed tears while getting her own tattoos, she said that she endured the pains like a strong lady because she was doing something that meant a lot to her back then. Tonto also shared some flashback photos so as to discourage her fans from getting tattoos: