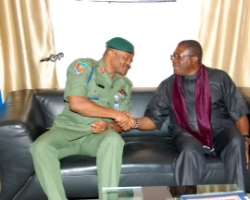 Imo State Governor, Owelle Rochas Okorocha, has said his government will continue to partner with Nigeria Army and other security agencies for security of life and property.

Speaking earlier today through his Deputy, Prince Eze Madumere, while receiving the GOC of 82 Division of Nigeria Army, Major. Gen. Shehu Yusuf, the Governor reacting to his giant strides in Imo State as observed by Major General Yusuf, he said said the achievement of Rescue Mission could not have been easy were it not for the corporation of the Nigeria Army, the Police, SSS, Civil Defense Corps and other security agencies.

Imo Governor, however, revealed the secrets of the achievement of the administration, which he linked to the sacrifice and selflessness for posterity sake. Explaining further, he said free education and the monumental infrastructural development being witnessed in Imo State is not unconnected to sacrifice, vision, selfless service and love for the people.

On memory lane, Prince Madumere recounted the bitter experiences of kidnap and other criminalities that held sway prior and at the emergence of Owelle Rochas Okorocha led Rescue Mission Government and how the menace was nipped in the bud with joint effort of all a sundry in concert with Imo State Government.

Earlier during the courtesy call, the General Officer Commanding, 82 Division, Nigeria Army, Major General Shehu Yusuf said his visit was a familiarization one especially in the areas of his responsibility on assumption of duty.

He however hailed Imo Government and the people of Imo State for the cordial relationship that exists between them and the Nigeria Army while promising that Nigeria Army, apart its primary duty of defending the territorial integrity of the Nigeria, will continue argument the effort of the government by playing a role in ensuring that there is adequate security of lives and property.

Major General Yusuf however presented a plaque of appreciation after his visit to Governor Okorocha and promised to discharge his duties professionally for utmost objective of creating a peaceful and conducive environ for the prosperity of the people in his division.