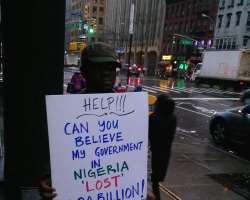 There were wild protests at the Nigerian embassy, New York on Friday February 21st Peregrino Brimah of ENDS is doing what he considers as fulfilling his civic duty to fight for sense and sanity in Nigeria after 50 years of mostly regression, which has taken a dangerous turn for the worst.

Peregrino Brimah hinted that the protests will continue. Other Protests are also being held at the Nigerian embassy in Germany, and more are expected worldwide.

According to Dr. Peregrino Brimah corruption and tyranny cannot be official government policy of Nigeria.

168 Million Nigerians are under siege. At the mercy of a reckless, fascist government that has made corruption its deadly official policy.

The Nigerian people demand sanctions and travel bans on political officers and global attention to the economic terrorism. There are 100 million destitute Nigerians while government officials loot billions of US Dollars every year. We call for global attention to the crises to the largest African nation and a very important nation in Africa and the world. What affects one man, affects all men.

Terror Sponsors Remain Free in Nigeria As Thousands are Killed: FG of Nigeria set to release list of political sponsors of Boko Haram (NEVER RELEASED SINCE 2012)

Support and See more @: http://ENDS.ng [Every Nigerian Do Something]