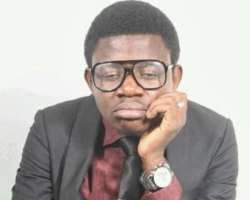 Few weeks ago, fast-rising comedian, Baba De Baba was said to have secretly taken his sweetheart, Debora Richards to the altar, where they exchanged marital vows.

The comedian, who Nollywoodgists.com knows acquired a car some months ago, after making some cash from making people laugh at events, is back on the streets of Lagos riding his 'leggedise Benz'.

For those who don't know, his wife is about seven months gone in the nine-month in her pregnancy 101 course.

Yours truly spotted the rib-cracker around Moyo Agoro street in Ogba, Lagos some days ago probably trying to hustle hard to prepare for the arrival of his first child. Trust Baba De Baba, he was so focused like someone who had just been disappointed from the loss of a multi-million deal.

His shoes were so dusty that KAI officials could have arrest him for not keeping them clean.

Can anyone tell Baba De Baba that God that feeds the birds in the air will surely provide for the necessary things to nurture his child? Bro, try and enjoy honeymoon.