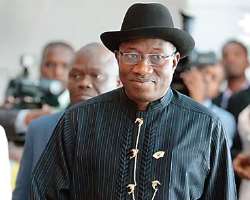 
Those who think that the North is one united block of opposition to second term bid of Goodluck Jonathan was jolted on Friday as  a new group of elders supportive of the president and his policies towards the region emerged.

In contrast to the belligerent tone of the Northern Elder's Forum (NEF) against Jonathan's bid, the group  spoke with a voice of reason.

It pledged to oppose all those they claimed were out to cause confusion in the land.

The group, which  comprises former ministers and National Assembly members and businessmen including billionaire businessman, Alhaji Hassan Adamu, Wakilin Adamawa, former Senator Muktar Aruwa among others, said that they were interesting in marrying northern interests with the need to sustain the corporate existence of Nigeria.

Yakassai at the inauguration of the council in Kaduna said 'We reject intimidation, threat and violence. Leaders and elders must lead by example. It is unacceptable for elders to make inciting and inflammatory statements capable of breaching the peace. We say no to war-like and belligerent posture.

'Let me reiterate that the purpose for the establishment of NEC is to protect the socio-economic and political interest of the north, the corporate existence and stability of the Nigerian nation.

'We are firm and committed to the Nigerian project, we recognise the significance of Nigeria's centenary as a political entity and call on all Nigerians to serve as agents of consolidation of national unity and continued existence of our nation as one indivisible country.

'The Northern Elders Council acknowledges the current spate of violence and insurgency in the North, armed robbery and kidnapping in the other parts of the country and we urged all men and women of good will to act in concert to eradicate these menace and stabilise the polity.

'The Northern Elders Council applauds the excellent working relationship with between the President Goodluck Jonathan and his vice, Mohammed Namadi Sambo, as the political leader of the north. Namadi Sambo has shown total loyalty and dedication to Mr. President and we urged them to continue work together in harmony in the interest of our nation.'

According to the respected elder statesman, the group was supportive of the forthcoming national dialogue.

In his remarks, Governor Yero said the emergence of the group was a welcome development.

He said,  'As an ardent believer in the power of dialogue in building unity among diverse people, I salute the courage of our elders in forming this eminent group and I declare my absolute support to the ideals of the Northern Elders Council.'

Junaid's assertion nonetheless, immediate past governor of Kano State, Mallam Ibrahim Shekarau pledged to work for the re-election of Dr. Jonathan in the 2015 presidential election.

According to Mohammed, NEC  will be of no significance  in the determination of Jonathan's fate in 2015.

Mohammed, who was reacting to the inauguration of the Northern Elders Council, NEC, in Kaduna on Thursday, described the group as alien to the political history of the north and its people.

The politician said the emergence of the NEC was meant to curry political patronage from the Presidency for the rehabilitation of most of the members, who were in dire need of help, as they did not enjoy the mandate and support of the people of the north.

Mohammed said, 'The so-called northern leaders and elders are not speaking for anybody in the north but themselves. They like to embellish the truth in order to get cheap political patronage from the powers that be.

'I want to put it on record that none of these so-called northern leaders can deliver the region to Jonathan in 2015 because the people of the area are not with them. When the chips are down, they will run away.

'It is unfortunate that political prostitutes who have access to the media have been taken seriously by the government and heavily supported to blackmail the genuine political leaders in the north for selfish reasons.'