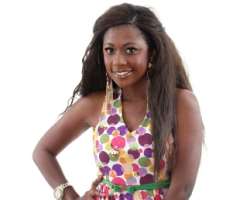 Former BBA- Chase housemate Selly is an actress from Tema in Accra, who joined Big Brother because of “the mouth-watering prize package” that she says would change her life, and also because she wants more drama in her life to “spice it up more, she has more dramas lately after she was spotted in an ungodly picture poses with Huddah Monroe,a picture that was taken by her boyfriend, Praye Tieta and she is denying that she is bisexual.

She has this to this: My attention has been drawn to an article published on the Ghanacelebrities.com on Saturday 1st February, 2014 captioned: “In the Face Of On-Going Bi-Sexual Accusations; What Is Wrong With These Photos?” Reference was then made to some snapshots I had with Huddah Monroe, who represented Kenya in the BBA, when she visited Ghana a few months ago. The article labelled me as bi-sexual and sought to create the impression that I was cheating on my fiancée, Praye Tietie.”

She continue: “I wish to state unequivocally that the story that the story published on the website and other news portal was fictitious, concocted and a desperate attempt by my detractors to impugn my hard won reputation.My relative silence since Saturday must not be misinterpreted as that of fear or guilt and I challenge the author to provide proof of the story if any. The said photos which were the subject of the article were even taken by Praye Tietie and not in secrecy as the author wanted the public to believe.”