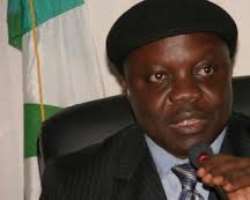 Delta State Governor, Dr Emmanuel Uduaghan has expressed outrage at the brutal killing of Mr Toyin Obadina, who until his death was the Assistant Editor of Newswatch newspaper.

The governor described the death as most cruel giving that the late editor was killed by so called armed robbers, despite having cooperated and willingly surrendering valuables in his possession.

“This is a most cruel murder. Even in wartimes, you don’t kill a man who willingly surrenders. This is why I am particularly shocked by what these so called robbers. Why kill a man without any provocation? “, he asked.

Dr Uduaghan urged the police and other relevant security agencies to immediately step into the matter and bring the perpetrators to book, warning that such a heinous crime must not be allowed without the offenders being punished.

He praised the courage and commitment to duty by the deceased. While pointing out that the late Obadina was killed while returning from work. “You may say he died on active service “, he added.

The Delta State Governor prayed God to grant the publisher, Barrister Jimoh Ibrahim, editors and staff of the newspaper, the media and family of the late journalist the fortitude to bear the irreparable loss.