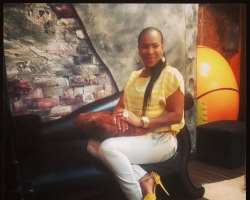 When Will Fathia Balogun Talk About Her New Relationship?
Jan 30, 2014No Commentsby aprokocity

Fathia Balogun has been enmeshed in one controversy or the other in the last few weeks. From been accused to be a lesbian, to name change court case saga that is still pending. But all the same, Fathia still remain one of the hard working actress that can't stop storing us with her creative prowess. And now, gist in town has it that Fathia is seeing someone else whose full image is still concealed in the dark. They are engaged secretly already.

Chavo Guerrero Admits His Admiration For The Rock And John Cena
We heard the young man is not yet ready to take her officially as a wife at the moment. We heard the young man is also behind Faithia's insistence on not changing her sure-name yet because she still need to demand some of her rights from her estranged husband in the law court. Sources in the know told us that the young man, identified as Seun is a money bag the shuttles between Nigeria and the United States for business. He is also married with kids but currently in the process of divorcing officially from his Nigerian born US wife. They are separated already but Seun still needs an official paper to back up the separation.
Khloe Kardashian-Odom and Kris Jenner for Real Husbands of Hollywood New Series

We are told that once the two intending couples (Fathia and Seun) court case is been sorted out, they will officially announce their engagement. Already, Seun and Fathia have been sighted in locations in Lagos and the United States according our informants. We heard Fathia who was also linked to the former NURTW boss, Olohunwa was dropped by Olohunwa because he discovered that Fathia was not faithful to him. Olohunwas had sponsored Fathia's projects and movies for the past three years. Let's keep our figures cross and watch as it all play out…