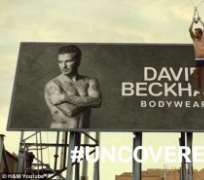 Super star sportsman David Beckham will be taking nudity to heat up the Super Bowl as part of his latest underwear campaign for his H&M collection - David Beckham Bodywear. Even though his chiselled body has already graced too many ads across the nation, if not the world, the Spice Boy is billed to surprise his millions of fans by eliminating all his cloths in public.

The 38 year old sex symbol admits it's a different and not-so-easy game when it came to stripping down for the sensual and suspenseful ad. 'Having it [the ad] at the Super Bowl, it's no bigger and better than that,' the blond beau of Victoria Beckham said, 'So, it's kind of daunting because obviously there are so many people watching it. But I'm excited to see what people think.' He ended.

The H&M campaign was filmed with two different endings. One version shows the hunk completely stripped down, as the other shows him in boxer briefs. Meanwhile fans will become the deciding factor as to which ad goes up. Without disclosing his opinion, David claimed to have an inkling at which one will win, which he said to be 'even more nerve-racking.'

The soccer star is seen struggling to find a way to his destination - studio after been locked out - between using his shirt as a sling to zipline across rooftops and one of his sexy billboards or simply running around like a madman. The #covered version of the ad will see David arrive at a photo shoot wearing only his signature H&M boxer briefs.

And in the other, titled #uncovered, the tatted A-list athlete strips down completely, which will clearly be censored for national television.

Which one of the ads guys, would you really love to see?