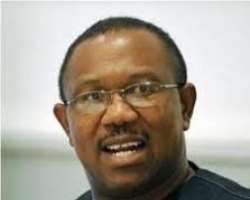 Some political commentators have claimed that without Governor Peter Obi, the All Progressives Grand Alliance (APGA), would by now have gone into oblivion. In fact, they argue that it would have died naturally without even being given a chance to succeed. And this would probably have happened in 2003 after the governorship election conducted by the Independent National Electoral Commission (INEC). It would be recalled that INEC declared the Peoples Democratic Party (PDP) candidate, Dr. Chris Ngige, winner of that highly rigged election. Obi, just fresh from the world of business into politics, filed a petition at the Governorship Election Petition Tribunal sitting in Awka, presided by Hon. Justice Garba Nabaruma. To many people it was a naïve decision for Obi to go to the tribunal and to reject all offers of money and position to cushion his election expenses. Before then, there was no precedent of an outsider who contested election unseating a sitting governor. On account of that, APGA lost majority of its followership who joined the ruling party to survive. It was even alleged that the leadership of the party then did not see sense in Obi fighting for his election as the petition dragged on for three and a half years.

But characteristic of Obi, he continued his fight. With his chaplet in his hand, Obi continuously recited his Rosary even in public. Then the unexpected happened. The election petition tribunal in Awka delivered it judgment upholding that Mr. Peter Obi won majority of the lawful votes cast in that election and ordered that he be sworn in as governor. Ngige immediately went on appeal. Then on March 15, 2006, the appeal tribunal upheld Justice Nabaruma's judgment and ordered that Obi be sworn in immediately. It sounded unbelievable but the next day, Obi was sworn in as Governor of Anambra state in Awka, while Ngige hastily left Government House.

Even when Obi assumed office, PDP members of the State House of Assembly who were clearly in the majority made sure that he did not find his work easy. Once he was impeached but he swam through the murky waters and regained his seat. On many occasions the House made the state ungovernable by not passing the annual budget or, when they did, made sure that much was not approved for him to work with. Despite all that Obi survived. Initially, he faced his administrative duties as governor and was criticized for abandoning the party.

But at the appropriate time, Obi not only rebuilt the party but also rebuilt some people that were thought to have been left behind. Now, all the communities in the state boast of several projects which the state government built in their communities. Virtually all communities in the state are now linked by tarred roads, and more and the people, including the clergy, believe that no other political party has served their interest more than APGA and this accounts for why the party has become a people's identity. Obi adopted a unique development strategy known as Anambra Integrated Development Strategy (ANIDS) which ensured that all aspects of the economy were developed simultaneously. Also, although there was a misunderstanding among party big wigs after the demise of the former leader of the party and Ikemba Nnewi, Dim Emeka Odumegwu Ojukwu, that dispute was resolved without the players allowing it to destroy the party. When Ojukwu was alive, he served as the General of the party, making sure that it was not dragged into disrepute. Then Obi served as the General Officer Commanding while Chief Umeh was the field Commander, ably tackling any kind of assault from outsiders. In that light APGA became a beacon of hope to Anambra people to the extent that recently, the Catholic Bishop of Nnewi, Most Rev. Dr. Hillary Odili Okeke, begged Obi not to leave politics as he felt that Obi's legacy was worthy of emulation. It was not surprising, therefore, that the National Executive Council of APGA in its meeting in Awka on Saturday, January 18, unanimously appointed Obi National Leader and Chairman, Board of Trustees (BoT). Before then the National Chairman of the party, Chief Victor Umeh, had hinted that Governor Obi would be duly recognised for his hard work and all the efforts he made to get the party where it is today. Then last month, the National Working Committee in its meeting in Abuja recommended Obi for the post of leader of the party. So, the NEC just confirmed that recommendation.

The Council members had unanimously approved the appointment of Governor Obi as the National Leader of the Party and Chairman of its Board of Trustees following a motion moved by the Oyo State Chairman of the Party, Mr. Samson Olaniyi, and seconded by the Bayelsa State Chairman, Mr. John Sokari. The Council equally approved the appointment of a 30-member BoT, selected from the six geo-political zones including: a former Commissioner for Women Affairs in Imo State, Mrs. Ann Dozie, while the appointment of Dr. Tim Menakaya was stood down following overwhelming objections from members of the Council.

The NEC members as well passed a vote of confidence in the Leadership of the APGA and rejected the recent judgment of the Federal High Court in Abuja, as well as set up a committee to review the constitution of the party while the NWC was mandated to fill existing vacancies.

The National Chairman of the Party, Chief Victor Umeh used the opportunity to present the State Governor-elect, Chief Willie Obiano and his Deputy, Dr. Nkem Okeke to the Council, while Governor Obi and some leaders of the party were presented with Awards. In his speech, Governor Obi said the struggle to reposition the party over the years was challenging but through sacrifice, doggedness and commitment the party has continued to excel. He commended those who stood firm and saw it through. He noted that his appointment was a call to duty and time to work to further uplift the party, stressing the need for unity of purpose and putting the party interest above every other consideration. He assured that he would continue to work to reconcile differences and bring every member into the fold to achieve more results. The Governor Elect, Chief Willie Obiano, in his goodwill message thanked the council for their support during the Governorship election and described the outcome of the election as victory APGA would replicate in other States by working as a family to tackle future challenges. He called on others to join the APGA, to be part of the giant strides to elevate the State to a higher level.The National Chairman of the Party, Chief Victor Umeh attributed the political success of the APGA to Governor Peter Obi's consistency, hardwork and landmark achievements, which he noted has made the State a reference point in the country and explained that his appointment as the National Leader was necessary to give him more responsibilities in the party.

Chief Umeh said APGA had become a force to reckon with in the country and would not be disturbed by antics of any form, urging the judiciary not to allow itself to be used to destabilize democracy.

He assured that the party was on strong footing to win more elections and would continue to work relentlessly to penetrate fresh frontiers and reinstated total support of APGA to the administration of President Goodluck Jonathan. Presenting an Award of Excellence to Governor Peter Obi on behalf of the Party, the Vice National Chairman of the Party, South West Alhaji Tai Sowumi described the Governor as the most performing Governor in the country whom he noted has raised the bar of leadership and redefined good governance in all facets. He said the Award was in recognition of his outstanding performance in governance and contributions to the growth and success of APGA. The son of the late National Leader of APGA, Dim Odumegwu-Ojukwu, Mr. Emeka Ojukwu, said Governor Obi was a worthy successor to his father. Also speaking a member of the Board of Trustees, Chief Martin Agbaso, said the Party was building a formidable structure to reclaim Imo State in the next Governorship election.The meeting was attended by APGA State Chairman of the Thirty six states and Abuja, more than seventy members of the Executive Committee members of the National Assembly, State Assemblies and Local Government Chairmen among others