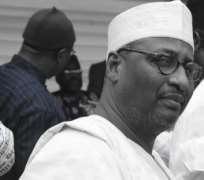 Believing that the waning anti-graft campaign in Nigeria would be pronounced dead if the tide is not radically turned regarding recent high profile political appointments, a civil society group – HUMAN RIGHTS WRITERS' ASSOCIATION OF NIGERIA (HURIWA) wants the duo of Mr. Boni Haruna and Alhaji Ahmed Adamu Mu'azu to quit their new juicy positions, until they clear their names of alleged heist of public fund.

The Rights group which thumbed down President Goodluck Jonathan for demonstrating “brazen insensitivity” to the public agitation for government to reinvent a vibrant anti-corruption battle, affirmed that the appointment of persons facing indictments of damaging criminal allegations even when several other technocrats without blemish abound, shows how unserious the Nigerian state under the current dispensation is about the hydra-headed monster of corruption.

In a statement endorsed by the National Coordinator Comrade Emmanuel Onwubiko and the National media Director Miss. Zainab Yusuf, HURIWA urged the senate to save Nigeria from the spectacular global opprobrium that has characterized the recent appointment of the duo by turning down the confirmation of Mr. Haruna as a minister and also advising Alhaji Mu'azu to quit his post as National chairman of Peoples Democratic Party (PDP).

The Rights group also frowned at the preeminent positional roles being played by persons with suspicious and bogus financial assets in the newly formed All Progressives Congress (APC) and called on the Nigerian civil society community to wake up from slumber, name and shame these reactionary elements in all the political parties who are warming up to deploy their ill- gotten wealth at public cost to manipulate the 2014 general elections.

The group said the task of rescuing Nigeria from the strangulating influences of money bags of suspicious sources in the politics of Nigeria is imperative if the widening chasm between the many haves-not and the few affluently rich political elite is to be arrested and save Nigeria from imminent implosion and disaster.

Specifically, the Rights group stated that the impression already created by the elevation of the two erstwhile state governors of Adamawa and Bauchi (Boni Haruna and Adamu Mu'azu) even when they are yet to secure clean bill of health from the competent judicial institution following allegations of criminal offences while holding the political offices of governor for eight years, is a bad signal for Nigeria's anti-graft crusade.

The group also blamed the hierarchy of the Economic and Financial Crimes Commission [EFCC] and the nation's court system for deploying sinister technical glitches to derail the speedy and efficient prosecution of alleged suspects of financial crimes among the highly politically exposed Nigerians over the past few years.

HURIWA affirmed that the inability of the EFCC and the Courts of competent jurisdiction to wind up the prosecution of the high profile cases against past governors has brought unmitigated bad image in the international community to Nigeria which is now being regarded as a nation administered by politicians as a 'criminal entity'.

HURIWA stated thus; “We acknowledged that constitutionally, an accused person is innocent in the eye of the law until convicted by the competent court of law, but we are also aware that in all sane societies, the moment any criminal charges are filed against persons, the most honourable line of action is for such persons to step aside from public offices and face the judicial process to clear their names since good name is globally believed to be more precious than wealth and political patronage”.

HURIWA recalled that in 2009, the Economic and Financial Crimes Commission (EFCC) had filed 28 amended charges against former Adamawa State Governor, Boni Haruna and three others.

The Rights group wondered why the wheel of justice in Nigeria is so slow that accused persons are now assuming higher political offices even during the pendency of their criminal charges in the courts of competent jurisdiction.

The three other accused persons are Mohammed Inuwa Bassi, Minority Leader in the Adamawa State House of Assembly, John Babani Elias, who is currently at large and Al-Akim Investment Nigeria Limited.

Haruna and Bassi were first arraigned by the EFCC on Tuesday August 5, 2008 on a 21-count charge of money laundering and stealing. They were later admitted to bail in the sum of N100 million and one surety each in like sum who must be a responsible citizen and provide evidence of ownership of property in Abuja worth that sum.

The court also ordered that the accused persons should deposit their travelling documents, including their international passport, with the court.

The Rights group also stated that the EFCC is reportedly investigating Mr. Mu'azu for allegedly stealing billions of naira belonging to Bauchi State during his term as governor between 1999 and 2007.