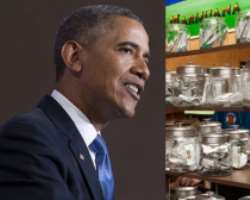 US President, Barack Obama has no problem with weed consumption but will not tolerate alcohol intake in America! The world's most powerful man is likely making marijuana more and more popular and legalized now; even though his two daughters, Malia and Sasha, are forbidden to take a smoke!

In a recent interview with New Yorker on the fight for the ban of marijuana in US over the weekend, the president clearly states that although he doesn't condone it, he does not see it as a major drug; rather alcohol has the most effect on health. Obama believes that marijuana is not as dangerous as alcohol and that the ban in most states in America unfairly targets the poor and minorities.

'As has been documented, I smoked pot as a kid, and I view it as a bad habit and a vice not very different from the cigarettes that I smoked as a young person up through a big chunk of my adult life. I don't think it is more dangerous than alcohol,' Obama told Remnick.

Mr. Obama clarified that he believes pot is less dangerous than alcohol 'in terms of its impact on the individual consumer. It's not something I encourage, and I've told my daughters I think it's a bad idea, a waste of time, not very healthy.'

But the most troubling aspect of the federal ban on marijuana is it's impact on specific segments of the population - especially African-Americans like himself.

On the intricacies of hypocritical stances on drug use in the eyes of politicians, or what should be done if someone is found in possession of marijuana, Obama had to put the blame on some officers or the judiciary, 'We should not be locking up kids or individual users for long stretches of jail time when some of the folks who are writing those laws have probably done the same thing,' he said.

Is Obama trying to side with some celebrities like Justin Bieber who has had a series of runnings with the law for drug possession?