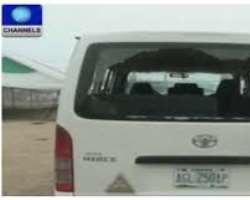 
Rivers State was again centre of political violence on Sunday when unknown hoodlums broke into a rally and unleashed mayhem.

Guns, machetes and other dangerous weapons were deployed to destroy canopies, cars and buses, forcing people to run for their dear lives.

Secretary to the Rivers State Government (SSG), Mr. George Feyii, deputy speaker of House of Assembly, Hon, Leyii Kwanee, and several other loyalists of Governor Rotimi Amaechi were among those who forced to their heels as a result of the rampaging attacks.

The rally was  organised by the Save Rivers Movement (SRM) at Bori, headquarters of Khana local government area.

This incident is coming on the heels the disruption of a

Similar rally by men of the Rivers State Police Command barely a week ago in Port Harcourt during which the chairman, Senate Committee on Petroleum (Downstream), Senator Magnus Abe, was allegedly shot with rubber bullets.

It was gathered that the armed youths stormed the Anglican Church field, venue of the rally at about 8.00 am, shot sporadically into the air, and destroyed the canopies and chairs being arranged for the rally which was scheduled to start by noon.

Reports indicate the  unknown gunmen left the venue while the organisers of the rally tried to re-arrange the canopies and chairs for the rally.

They, however, returned at about 11.00 am with more weapons and continued shooting.

Members of the SRM, as well as their invitees, including the SSG, Feyii, the deputy speaker of the State House of Assembly, Kwanee, the Chief of Staff, Government House, Port Harcourt, Chief Tony Okocha, and several other federal and state lawmakers, were said to have scampered for safety, leading to the call off the rally for fear of further attacks.

Speaking to newsmen shortly after the disruption of the rally, President-General of SRM, Mr. Charles Aholu, said the police were watching while the armed youths sacked the venue of the rally.

Aholu lamented that the Rivers State Police Command did not provide the pro-Amaechi group, with the security it applied for and merely came to barricade all roads leading to the venue after the shooting.

'After they left, we tried to re-arrange the venue, but they returned at about 11.00 am with more sophisticated weapons and started shooting again. The policemen around were just watching and did nothing to stop them; and this shooting was happening approximately 15 metres away from a police station.

'We applied for police security for the rally, but with what happened; it is obvious that the police did not provide the security that we applied for.'

He, however, said the SRM was not deterred by the development and would continue to carry out its duties.

Aholu said; 'Save Rivers Movement will not be deterred or defeated. We will continue to work to achieve the purpose for which the Save Rivers Movement was set up: to liberate Rivers people from the shackles of ignorance and from the hands of people who want to mortgage the state. The police should stop partisan policing and be professional in their duties as they claim.'

Giving his own account of the incident, deputy speaker said; 'I arrived at Bori only to be informed that earlier before my arrival there had been some shooting. Canopies set for the rally were pulled down. While trying to put them back, the Secretary to State government, Mr. George Feyi, arrived with some government dignitaries. While all that was going on, there was a fresh round of shooting and we all started running for our dear lives.'

Kwanee, who represents Khana Constituency 11 in the House, decried the refusal of men and officers of the Rivers State Police Command to move in to arrest the shooting by the armed youths.

He said; 'At the Bori Police Station, which is just some few metres away from the Anglican Church, there was a heavy police presence, with about 20 police trucks and they were all gathered in their hundreds on the field, taking orders.

'In the face of this police presence, all these were happening and there was just no response from the police personnel to save the lives of the people. It is very sad and condemnable that this is happening; and it is just a signal of the dangers of 2015.'

Meanwhile, the Peoples Democratic Party (PDP) in Rivers State has described the sporadic shooting and disruption of the SRM rally in Bori, which it alleged claimed two lives, as a local resistance by the people of Ogoni to the coming of the APC.

In a statement signed by the special adviser to the state chairman, Jerry Needam, the PDP said the violence was masterminded by the administration of Amaechi, the SRM, and the APC, to continue to create a state of insecurity to justify their call for the removal of the Commissioner of Police, Joseph Mbu.