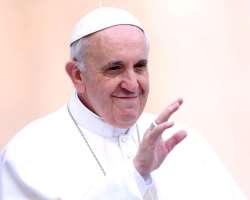 
A nun who was rushed to hospital complaining of acute stomach pains has given birth to a baby boy in Italy - and named him Francesco after the Pope.

The boy was born  in the central Italian city of Rieti, and the nun said she had no idea she was pregnant, local media report.

The 31-year-old was rushed to hospital with abdominal pains, which she thought were stomach cramps.

The discovery of her pregnancy has embarrassed the Catholic Church in Italy, with the local bishop saying that she will have to leave her convent in Rieti, north of Rome, after breaking her vow of chastity.

'It would be preferable that she now lead a secular life with her baby, away from religious institutions,' said a spokesman for Delio Lucarelli, bishop of Rieti.

The nun, who is from El Salvador, had kept her pregnancy a secret and even as she was being taken to hospital in an ambulance denied that she could be pregnant.

'It’s not possible, I’m a nun,' she told doctors, according to the Italian press.

The nun, who has not been named, had been working in an old people’s home attached to the Campomoro convent near Rieti. She was a member of the Little Disciples of Jesus order.

The convent’s mother superior, Sister Erminia, said: 'It seems she was not able to resist temptation.'

There was speculation that the nun may have fallen pregnant during a visit to her home country last year.

She named the baby boy, who weighed 7.7lbs, Francesco - apparently in tribute to Pope Francis.

'Both mother and baby are in good health,' said Pasquale Carducci, the director of the local hospital.

Sisters in the convent said they had no idea she was expecting a baby.

'We noticed she had put on weight but recently she had kept herself to herself,' one said.

The local diocese said assistance would be given to the woman and her baby for a few weeks until she decided on her future.

The mayor of Rieti also offered help.
'If she needs assistance we will provide it, as we would for anybody,' said Simone Petrangeli.